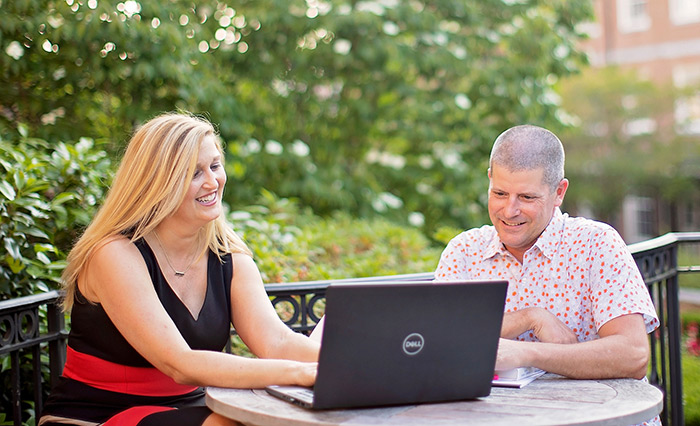 For Nicole Otero, helping adults earn their college degrees is not only a passion, but it is also personal. Otero strives to do this each day as the associate director of  Professional Studies at Samford University, which is the university’s undergraduate online degree program. Many students who enter the program went to college many years ago but left before graduating.

“Students leave for a number of reasons, most often there was a lack of finances or a family emergency, but sometimes it is a lack of guidance or a support system. Unfortunately, many of these students never return to college to finish their degree,” Otero said.

As a former college drop-out, Otero understands the challenges of these students all too well, having attended college for two years before leaving.

“I really did not have a lot of guidance at that age. I was a first-generation college student. I had student loans and worked,” Otero said. “It was hard trying to pay rent on a part-time salary, while also making time to study and have a social life.”

Otero left college and began working full time. Eventually she completed an associate degree at a community college and started her career as a paralegal. Many years in, she still wanted to complete her bachelor’s degree and start a new career. She learned about the Professional Studies program at Samford and not long after began working at the university.

“This program just clicked for me. I worked during the day and went to school at night, all while caring for my family. It was convenient and it just worked! This program really supported me and so many students had stories like mine,” Otero said.

She not only earned her undergraduate degree, but went on to earn her master’s from Samford, too. Soon after, Otero began working in the same program that she gave so much to her— Professional Studies.

“I really wanted to help people just like me and reach out to those who left college with no degree. I thought if someone had reached out to me after I dropped out, encouraged me, or nudged me at all, I might have gone back,” Otero said. “Many universities don’t do that. I thought, why not?” Otero said.

Otero started reaching out to former Samford students who had not graduated, but left in good standing, throughout the past 20 years.

According to Otero, most of the former students she spoke with expressed excitement that they could finish their degree online. Many had checked into how they could return over the years, but they were unable to be on campus due to either living out of state, working full time and balancing several obligations.

August Jones was one of the students she contacted. Jones left Samford as a senior in 2010 with only a few credits left to graduate. She planned to major in business at the time and was able to apply most of her credits to the organizational leadership track offered by Professional Studies. When she heard it was online, she jumped at the chance. Two semesters later, Jones graduated this past April and says she is now able to advance in her career thanks to earning a college degree.

“It is very encouraging to return to Samford to learn alongside other returning adult students who are individuals seeking development for career change or advancement,” Jones said.

“I always tell students who aren’t confident when returning that it doesn’t mean anything that they dropped out. They are here now and it is going to work this time. We are here for them; we can be that support. We are their people,” Otero said.

Professional Studies hopes to continue to find former Samford students who still want to earn their degree. Otero says it doesn’t matter if they have been gone for five years or 30.

“We want our bulldogs back and we want to help them achieve their dreams,” Otero said. “Samford believes in lifelong learning and that is what Professional Studies is all about.”

Samford Professional Studies provides contemporary students a way to earn their degree in a flexible online environment. Students attend 8-week terms to complete their degree at an accelerated rate, while offering a significant tuition discount.

For more information about Professional Studies, go to its website at samford.edu/programs/professional-studies.