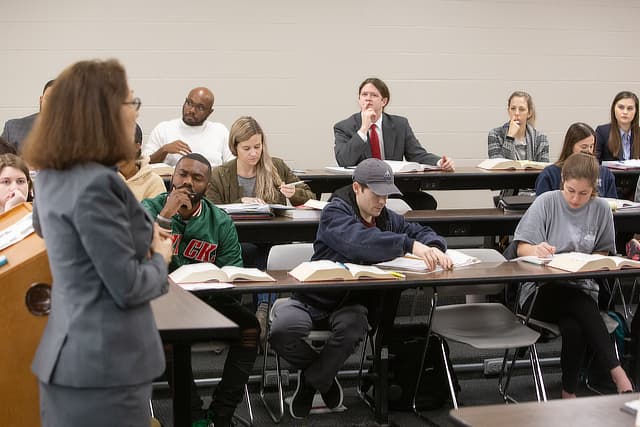 Samford University has been recognized by U.S. News & World Report as one of the best universities in the United States for undergraduate teaching. According to the rankings, which were released on Monday, Sept. 12, Samford is 66th in the nation for undergraduate teaching and is the only university in Alabama to make the list. Considering there are over 3,900 degree-granting postsecondary institutions in the U.S. recognized by the Department of Education, this ranking places Samford among the top 2% of all colleges and universities in the country.

The rankings were determined by college presidents, provosts and admissions deans around the country. Each nominated up to 15 schools within their U.S. News ranking categories for which they believed faculty and administrators were committed to teaching undergraduate students in a high-quality manner. At least seven nominations were needed for a school to be ranked and listed.

“Our faculty are some of the best in the country and I am thrilled that they have been recognized again for their hard work and commitment to providing an exceptional learning environment for our students,” said Samford Provost Mike Hardin.

U.S. News & World Report ranks Samford 127th overall among all national universities, which includes the largest and most prestigious private and public institutions in the United States. Universities on the National University list offer a full range of undergraduate majors as well as master's and doctoral degrees. There are 440 national universities included in the 2023 overall rankings. The ranking criteria include academic reputation, graduation and retention rates, class size, faculty/student ratios and peer assessments from higher education leaders.

“Samford continues to be recognized as a leader in quality education, teaching and value, and we are pleased that it is ranked amongst the best universities in the country,” said Samford President Beck A. Taylor. “Although national rankings are just one measure of success, the recognition provides affirmation for our students, employees and alumni. As we continue to grow and thrive, we also celebrate the growing national reputation of our university.”