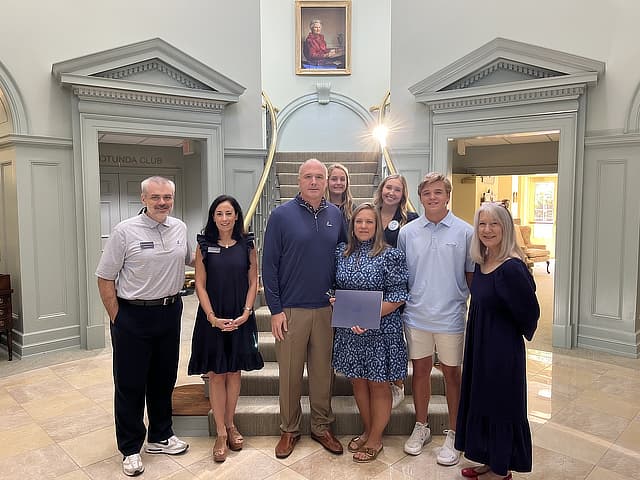 The Clayton and Teresa Hemphill Endowment was established in September 2022 to support ongoing capital projects at Samford University.

Teresa ’97 and Clayton Hemphill ’97 met during their time at Samford. Clayton likes to say they “met in the middle” because he came to Samford from Dallas, while she moved from Atlanta. After living in Orlando for some time, they recently moved back to Atlanta to be closer to their eldest daughter, Avery, a Samford freshman. As they visited Samford for Family Weekend 2022, they were met with precious memories while walking through campus.

“We’re excited that she is at Samford,” Clayton said. “We didn’t overly push her, but she loves hearing the stories of the positive experience we had, and she’s excited about being there. Samford is a special place.” While their positive Samford experiences played a role in their philanthropy, Clayton also watched his family support their small Baptist alma maters over the years. Their legacy inspired him, and he shared that this endowment is a continuation of their example for his children.

When the Hemphills were living in North Caroline post-graduation, they struggled to find a community of Samford alumni. They advocated for Samford to others but craved to be more involved than simply reading Seasons or receiving alumni emails. When they moved to Orlando, they instantly found more community. Teresa connected with old sorority sisters, and Clayton kept running into parents whose children were at Samford. They were very active in revitalizing the Orlando Alumni Chapter.

Casey Ramey, executive director of the Samford Alumni Association, proclaimed her gratitude for the Hemphill’s dedication. She said, “Teresa and Clayton Hemphill were instrumental with the Orlando Alumni Chapter as we resumed hosting in-person events after being virtual during the pandemic. Their connection with alumni in the Orlando area created a wonderful community through the chapter as the Samford University Alumni Association resumed such an important component of the Samford Alumni Regional Chapter Program.”

When asked why they decided to establish an endowment to Samford, Teresa answered, “If I can trust Samford with my child, I can certainly trust them to best utilize our donation and invest in a way that meets the goals of the university." The Hemphills are excited about the capital projects at Samford, and their hope is for Samford to continue to progress and improve just like it has since they graduated.

For more information on how you, too, can make a transformational gift like the Hemphill family, contact Doug Wilson by emailing dwilson@samford.edu or calling 205-726-4266