Published on October 14, 2022 by Diamond Nunnally and Frank Ruggiero   Share this on: 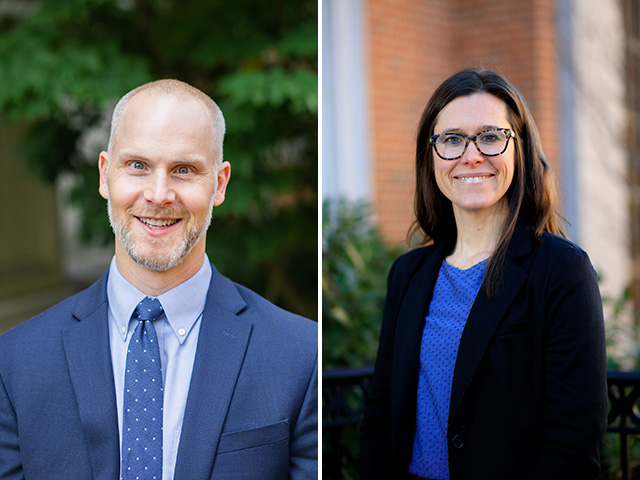 Two Samford University faculty members will benefit from $60,000 in research grant funding from the Council for Christian Colleges and Universities (CCCU).

According to CCCU, these grants “provide Christian college and university faculty members and their colleagues the opportunity to collaborate and connect with the broader scholarship community, while providing a vital component of Christian-based research to multiple areas of work.”

Kynes was awarded $30,000 to be distributed over three years to support his research on “Is Wisdom Literature Dead? The Future of Israelite Wisdom Studies.”

“I’m grateful for this opportunity to work with leading scholars in my field, Jacqueline Vayntrub from Yale Divinity School (in New Haven, Connecticut) and Mark Sneed from Lubbock Christian University (in Lubbock, Texas), to shape the future study of wisdom in the Bible,” Kynes said.

Kynes’ research will further examine an argument posed in his book, An Obituary for “Wisdom Literature.” He asserts that “wisdom literature,” a category of literature created in the 19th century, distorts the understanding of wisdom in the Bible according to 19th-century interests, such as universalism, humanism, individualism and rationalism.

“This is an exciting opportunity to draw a broad range of scholars into a debate over the merits of my argument and its implications for the future of the field,” Kynes said.

This grant will allow Kynes and collaborators to host two-panel discussions at the Society of Biblical Literature in Denver, Colorado, in December and an online seminar in the spring. The panels will facilitate discussions with 11 scholars about whether “wisdom literature” is dead.

“We’ll explore what the study of wisdom in the Bible could look like if this 19th-century category is no longer imposed on the Bible,” he said. “We will then collect those contributions into an edited volume.”

The hope is that this volume will be used in courses on wisdom and shape the future study of this concept.

“Wisdom is vital for human flourishing, and the Bible is an incomparable resource for wisdom, but if we misinterpret what the Bible says about wisdom, we risk squandering this resource,” Kynes said.

The other Faculty Networking Grant will benefit Hagues in her research on “Understanding Resilience in Women Refugees.” Hagues is part of a research team spanning Samford, Biola University in La Mirada, California, and the private sector. The grant itself is being awarded to research team leader Jamie Sanchez at Biola and will also be distributed over three years.

The funding will allow Hagues and her colleagues—Sanchez, Laura Dryjanska (also from Biola) and private practitioner Jackie Park— to research abroad, which Hagues admitted can be costly, as many of their interviews will have to be conducted in other countries.

Their research, she explained, focuses on understanding how refugee women develop resilience. Specifically, Hagues and her colleagues hope to learn how personal attributes, religion, refugee communities and host communities contribute to the development of research within these women.

“I’m excited to expand my previous work, as this project has a special focus on women, who often experience very hostile, traumatic experiences on their journey in an effort to escape unsafe environments at home, such as war and persecution,” Hagues said. “As a social worker, I’m especially excited to learn about what kind of things host communities can do to contribute to the development of resilience, as I think it can inform how we (social workers, churches and communities) respond.”

Hagues described herself as a qualitative researcher, concerned about understanding people’s lived experiences.

“I have a huge heart, especially for justice issues, and refugees—or sojourners—are considered part of the ‘quartet of the vulnerable’ that God cares for specifically and expects His people to care for, as well,” she said.

Hagues will ultimately apply her research to the classroom, helping prepare her students to work with vulnerable populations.

“These grants enable us to show our commitment to the talented faculty that work day in and day out on campuses, such as Samford’s,” CCCU president Shirley V. Hoogstra said.

The grants also offer the ability and opportunity to add Christian intellectual perspective and research to the many contemporary academic conversations taking place today — conversations to which Samford is honored to contribute.

“I am very proud of our Samford faculty for receiving these grants, as they are a clear indication of the outstanding and highly notable research in which our faculty are engaged,” Samford provost Michael Hardin said. “We are also grateful for the partnership and support of the CCCU as we work together to advance the cause of Christ-centered higher education.”