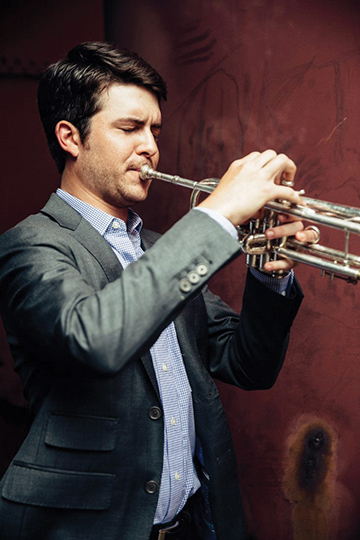 Bonus Fact:  As part of the band, he has played for and gotten to meet The Rolling Stones, Sir Elton John, Sir Paul McCartney and David Letterman.

What is the best advice you were ever given and by whom? I read a book called Zen Golf by Joseph Parent. Golf and playing the trumpet are very similar from both the mental and physical sides. Learning how to control my mind and completely disengage from negative thoughts while playing was a revelation. I have a stutter, and it occasionally affects my trumpet playing. Learning how to relax and get rid of the stutter in my playing ended up being a very similar process to golfers learning how to eliminate their “big miss.” Using a sports psychology approach was the key for me.

How do you stay grounded with your travel and performance schedule, especially when you get to do big-time gigs? The travel and performance schedule do a pretty good job by themselves of keeping everyone grounded. Through November of last year, we hadn’t had more than four or five days at home since June and didn’t see any real time off until Thanksgiving week. When the job itself is as fast-paced as this, you don’t really have any choice but to keep your head down and treat every show the same, regardless of the size.

What advice would you give to students interested in pursuing music careers like you have done? If you want to have success in the music industry, you have to give it absolutely everything you’ve got from day one. It’s one of the most competitive industries in the world. We went in with the attitude that we had no other option than to succeed. We dedicated our lives to our craft, holding ourselves to extremely high standards even to this day. As far as the actual music goes, it’s not necessarily what you play, it’s how you play it. The cream will rise to the top no matter what style or genre of music you play. If your goal is to be the best and your work reflects that, you can be successful no matter what niche you fall into.

What was it like opening for The Rolling Stones? It was the most surreal experience you could ever imagine. There’s nothing I can possibly compare to rolling up to the Buffalo Bills’ football stadium in your beat-up little white van to play a rock show with the biggest band in the world. Some of our idols list opening for The Rolling Stones among their greatest achievements, and we got to do it twice. We got to take a single photo with them, and it felt like meeting the president (not Westmoreland!). Gigantic men in suits wearing sunglasses, a guy on a radio saying “We’re ready to receive the principals.” It was nuts. We had to sign a nondisclosure statement saying that we could not post the photo ANYWHERE online in order to receive the photo. I have the photo hanging in my house above my piano, and it’s definitely among my most prized possessions.