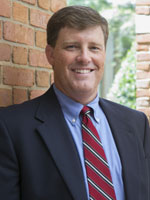 A bonus fact:  Michael was an Academic All-America football player at Samford and still holds several scoring records. Interestingly, Samford’s current placekicker also is named Michael O’Neal and is from Vestavia Hills. But, the two are not related.

How did your Samford degree / experience prepare you for your current role?  The education I received from has helped me tremendously in all areas of life. From classroom academics to lessons learned through athletics, I gained confidence as I learned to problem solve, relate to others, and give back to my community. I also gained lifelong friendships for which I am so thankful.

What is the most beneficial advice you received while a Samford student?  [Business professor] Edward Felton once told our class that the main difference between Harvard students and Samford students were their expectations. [Head Football] Coach Terry Bowden also emphasized personal expectations. We were taught to never settle for anything less than our very best.  These words have stayed with me, and I have come to believe that what we expect and demand of ourselves strongly affects our degree of achievement. What oftentimes separates achievers from non-achievers are their expectations from the outset.

What was your motivation for starting Reel Life and how has it evolved through the years?  My motivation for starting Reel Life International came out of a conviction on the way I have lived the majority of my own life as a Christian. The Bible is very clear that faith without works is dead, and it’s full of commands to care for the poor, the orphan and the widow. We are also commanded to go and make disciples of all nations. As believers, we are to be a light in this world and to do good works in order to glorify our Heavenly Father. Somehow, I have spent the majority of my life believing that these commands didn't really apply to me. I was quick to claim the promises of God's word while passing off the responsibilities of following Christ to others. Instead, I relentlessly pursued my own comfort and enjoyment. I was faithful in giving financially and felt that alone was sufficient.  Only in recent years did the Lord open my eyes to my disobedient and selfish lifestyle. I had been a believer nearly all of my life, but had rarely had the courage to speak about my faith. Just before founding the ministry, it occurred to me that if I am to love my neighbor as myself, then I should be as concerned about their salvation as I am my own. This realization not only caused me to start stretching my own comfort zone, but to encourage others to do so as well.  Reel Life trips provide participants the opportunity to serve those in extreme need and take an active role in furthering the kingdom of God.

Why is giving back to the community so important to you?  Giving back is important to me because of the clear commands we have in scripture. As believers, we are to be a light in this world and to do good works in order to glorify our Heavenly Father. I recently began to learn that 40 percent of the world's population lives on less than $2 per day, and that 26,000 children die each day due to starvation and preventable disease. The Lord has blessed each of us in America in tremendous ways, and with much blessing comes much responsibility.

How have you been able to use your business and entrepreneurial experience with your ministry involvement?  I have always had a bit of an entrepreneurial spirit. I decided the spring of my senior year that I wanted to own my own business by becoming an insurance agent with State Farm. After working as a field adjuster for seven years, I received an opportunity to come back to Birmingham and begin my agency in January of 2000. Having the ability to develop an excellent team within my agency has enabled me to carve out time to be heavily involved in ministry. In 2009, the Lord called me to begin Reel Life International, a ministry focused on assisting the church in cultivating a passion for the gospel through assisting orphans and impoverished families on short-term trips. During the trip, leaders also guide participants through an introspective study of biblical life principles which helps to promote life changing spiritual growth. Reel Life has grown to serve alongside our field partners in a variety of countries, including Costa Rica, the Dominican Republic, Haiti, Cuba, Mexico, Panama, Guatemala, Belize and Peru.