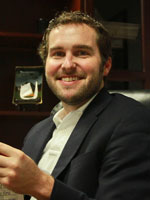 How did your Samford degree / experience prepare you for your current role? Samford is so much more than a conglomerate of classrooms. The experiences that I had leading, helping and growing around others helped prepare me not only for my professional role, but for life. From leadership roles in Samford's orientation program, I learned to teach, the importance of a positive attitude and the value of diverse teamwork to achieve a collective vision. Through Sigma Chi [fraternity], I learned about creative problem solving, leading highly-capable groups and the value of building things greater than yourself. There's no doubt, I wouldn't be in my current position without these experiences from Samford.

What Samford faculty or staff member had the most influence on you and why?  Jon Clemmensen and Dennis Jones, or "Dr. C" and "Dr. J", always pushed my desire to learn. I was always amazed by their commitment to teach the fundamentals of journalism while simultaneously moving forward in today's media world. Plus, they made journalism fun, and that's important to me. From ethics to creativity to harsh critiques, I'm just one of many who has learned about life and media from those two.

What is the most beneficial advice you received while a Samford student? While I was at Samford, my dad (who also went to Samford, as did my mother, brother and sister-in-law) told me to avoid making enemies and to pick my battles. He's had to remind me of that a few times over the years, but it has altered my life immensely. So, don't fight every battle, but also, don't lose the ones you fight.

What is a favorite Samford memory? Other than the Sigma Chi foam party I threw at Club Chaos in downtown Birmingham, with the proceeds going to Student Ministries? I had a great time throughout my time at Samford and have stories for a lifetime. Perhaps the story I tell most often is that of our fraternity's intramural softball team that finally made our undefeated run during my senior year. It had been a long, arduous road, but we finally were champions. I'll also never forget my journey with Jacob Simmons and John Roberts to try out for ESPN Dream Job. There were lots of adventures.

How have you been able to use your business and entrepreneurial experience, combined with your JMC and social media background, to help the community newspaper industry? I think by just bringing life to it. It's an industry that has been beaten down with a sledge hammer in recent years, and I come in with a new plan to help turn old, established newspapers into new-age, community-engaged media companies. Everyone wants to be successful and relevant. I just try to open up the pathway to help talented people get there. We have such an advantage in that we have established brands and customer bases within communities, so our "name" means something. We just have to make it relevant moving forward. So my favorite thing is watching members of my staff or our community say, "You can do that at a newspaper?" It's fun to build momentum. It's fun to see people's faces light up. It's fun to help change an industry.