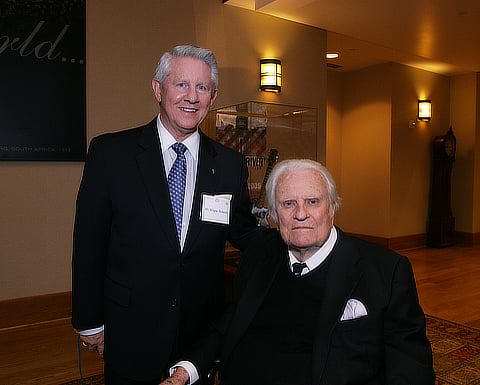 What Samford faculty member had the most influence on you and why? George Smith was not only my journalism professor but public relations director for then Howard College, and I was blessed to serve all four years under his tutelage in the PR department while working my way through college. He was the best in his field and what I learned under George has influenced my entire working career in public relations and communications. He taught me writing skills, how to work with the newspaper, radio and television media, advertising, promotions and publications. We are good friends to this day, more than 50 years later.

What is the best advice you were ever given by whom? My parents guided me as a 7-8-year-old boy to read my Bible and pray every day. This was not advice but this practice throughout my life has allowed my Heavenly Father to “order my steps” and keep me on track and in His will on this exciting journey with Him. My early morning time with the Lord has included reading the Bible through in numbers of years and spending time in prayer to keep me focused as a Christian. Nothing is more important than learning the value of daily time in God’s Word and prayer that my parents taught me.

Why did you choose Samford? My father was a Baptist pastor/evangelist when I was born. He had me singing on his radio program when I was five. I would join him preaching on the streets and conducting tent revivals, and I would even attend three Vacation Bible Schools in one summer. The church ladies always pegged me as a preacher. I went to Howard College thinking that God may call me to be a minister, but I never felt the call. I even went on H-Day Sundays (now Samford Sunday) with the preacher boys as a layman. I had a glorious experience at Howard and it really prepared me for Christian ministry across America.

How did you become involved with the Billy Graham Evangelistic Association? Franklin Graham came to Tuscaloosa to conduct a festival (crusade) in 1999 while I was serving on the athletic department staff at Alabama. I was also adviser of the Fellowship of Christian Athletes chapter. To my surprise, the local committee asked me to be chairman of the festival which required 12 months of preparation. When the Billy Graham Library was being built in 2006 in Charlotte, North Carolina, I was called to interview as their first director. Franklin hired me and to serve the Lord Jesus at this special place has been the “dessert of my career.”

What does your role at the library include? When I came as the first director, I hired key staff leaders, led in recruiting 300 volunteers and promoted the library through various conventions, churches, Christian organizations and media outlets. In the past few years, I continue to host special guests, have given more than 1,000 library tours, have become the historian for Billy Graham and serve in donor ministry. We have had 1.1 million guests and 30,000 decisions for Christ. It is the highest honor for me to be the historian for the man who preached the Gospel of Jesus Christ to more people than any man since the days of Christ.

You were very involved on campus as a student. What is a favorite Samford memory? I have too many but I have to include: Thursday night pep rallies at the girls dorm with Coach Bobby Bowden’s winning football teams; Chapel; Step Sing (our class won three years); A Cappella Choir; President Leslie S. Wright; living in Siebert Hall for three years with my wonderful roommate Paul Miller; serving as sports editor of the Crimson for four years and covering football, basketball and baseball games as student PR publicist; and sliding down the front campus hill on a cafeteria tray when it came a heavy snow one winter.

You’ve had a varied and distinguished career. What advice would you give to college students today? Get involved in what interests you now. Explore your gifts, skills and talents and gain as much experience in your chosen field as early on as you can. Proverbs 3:5-6 was my guiding Scripture verse in college. Choose good friends and the best are Christians with high standards. Have a quiet time with your Bible and prayer every day. Stay healthy and fit. Read and develop an interest in history. Make every day count with a positive attitude. Always believe that the best is yet to come.