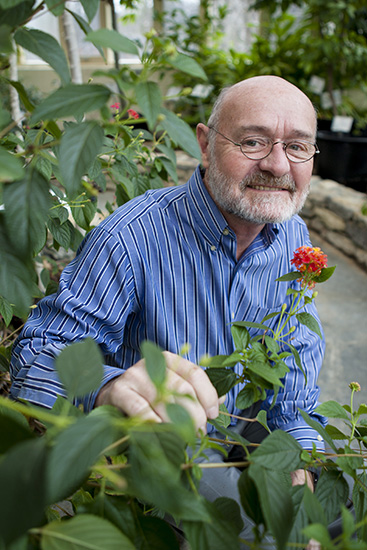 Teaching at Samford since 1985

Bonus fact: Davenport was honored in 2007 as Alabama Professor of the Year by the Carnegie Foundation for the Advancement of Teaching and the Council for Advancement and Support of Education.

Why do you teach?  I’m a natural teacher. It’s such a part of me that I’m not sure I could stop even if I wanted. I have a lot to say, with many stories to tell.  And, I try to tell those stories in a way that connects my audience to the information in a personal and meaningful way. I’m always listening and learning myself, which just adds to the need to teach!

What is one thing you want your students to know when they graduate from Samford?  We humans are a part of nature, not apart from it. I want my students to accept that fact, embrace it and live their lives accordingly. I want them to be aware of their everyday impact on nature—to know where things come from and where they go. It’s a tall order, I know.

What is your favorite non-Samford activity?  I’ve been in a band--Not Yet Ded--with my long-time partner in musical crime, English and law professor Mark Baggett, since 1996. Dr. Baggett plays rhythm guitar and harmonica and handles the bluesy-type singing. I play keyboards and slide guitar and sing the snarly, smart-alecky songs. It allows us to live out our teenage dreams of being rock stars. And, occasionally we sound pretty good!

What’s one thing that most students do not know about you?  I have written a quarterly natural history column, Nature Journal, for Alabama Heritage magazine since 1993. It provides me with a much-needed creative outlet as I pursue nature stories of interest. It’s made me a better writer, and it’s made me a better naturalist since those stories might be in geology, ichthyology, ornithology—things outside my comfort zone. It’s a continuation of my teaching, with several thousand eager reader-students four times a year.

You regularly play basketball on campus with a group of colleagues. How did that group get started and why do you participate?  The “noonball” group was started in fall 1985 by another first-semester Samford professor, Jennings Marshall of the Brock School of Business. We’ve added and (sadly) subtracted players ever since, maintaining about 20 “regulars.” It’s a competitive but friendly game with just a few rules: no cussing, no coaching, and no cell phones. I keep playing because it’s fun, and I’m still relatively healthy – AND the best 61-year-old point guard on campus.

You are very involved with a native plant called the Cahaba lily. How did you get interested in it and why are you so passionate about it?   My involvement began in 1988 when I learned that the U.S. Fish and Wildlife Service needed a local botanist to gather all available information about this rare plant, which grows only in the rivers and streams of the Southeast. The town of West Blocton (Alabama) heard about my studies, and in 1990 we held the first annual Cahaba Lily Festival there. It’s a way that the town reaches out to the larger community to join in celebrating this beautiful bloom and its habitat. I have been the keynote speaker and presented my latest findings at each of the 25 festivals.

Because it only grows in relatively clean and free-flowing waters, the Cahaba lily has come to symbolize the wild, undammed and unpolluted parts of our world—places that are well worth protecting and preserving. Thanks to the attention that the lily has been given, we’ve been able to do just that. The setting-aside of more than 3,700 acres near West Blocton) as the Cahaba River National Wildlife Refuge is a direct result of our efforts, and something I’m very proud of.