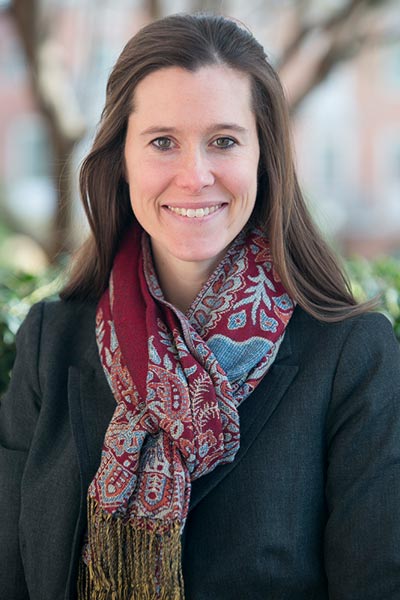 Teaching at Samford since: 2015

Why do you teach? In graduate school, I had the opportunity to teach a course and thought that I should do it for the experience. I had no idea that I would absolutely love teaching. Though it is challenging, teaching keeps me on my toes, and I am always surprised by how much I learn, too. I love seeing students make connections, love it when they ask questions, and get so excited when I see them grasp new things for the first time. I especially love it when I am able to challenge them to see beyond what they have seen before on issues such as human rights and social justice.

Why do you teach at Samford? I’ve chosen to teach at Samford because I love that the school’s mission is so holistic — “to nurture persons in their development of intellect, creativity, faith and personhood.” I love that I am not simply trying to impart knowledge of a particular subject, but that I am encouraged to teach my students in a way that nurtures their whole person, including their faith. You don’t see that at secular universities.

What is one thing your students may not know about you? When I was a kid, one of the things I thought I would do when I grew up was be a missionary in Africa. Specifically, I thought I would run an orphanage or something of the sort. As I grew up, went to college, got married, went to graduate school, that dream was still there but seemed so impossible. Now, in some ways, that dream is becoming a reality, as I am collaborating with community leaders to build a secondary boarding school for girls in Tanzania. Though this not in the way I had envisioned it as a child, it is pretty incredible that the Lord gave me a heart for overseas ministry.

What is your favorite hobby? Other than being outside with my family, my favorite hobby is probably running. I love running, love training hard and love racing after a good season of intense training.

How did you become involved with the women and girls in Tanzania? I was invited in 2008 to go on the inaugural partnership trip to Ukerewe, Tanzania. The University of Georgia was attempting to establish what would be a partnership with that community and faculty/staff/and students from UGA. My dean wanted someone with training in child development to join the team. [She] gave me permission to go and was even able to support my going as professional development. I immediately fell in love with the women and girls I worked with there. The partnership never really got off the ground, but I was able to keep going back to Ukerewe through small grants I was able to obtain and end of year departmental funds as a graduate student. After going several times, I truly felt dedicated to the women and girls, and in many ways I felt responsible to them. I think about the verse, “to whom much was given, of him much will be required” (Luke 12:48). These women and girls lived such difficult lives yet they were willing to openly share so much of themselves with me. I’m committed to seeing their lives improve for the better.

What is some of the interesting research you are currently doing in your field? I just received a faculty development grant, along with (social work faculty members) Ken Stoltzfus and David Cecil, who will join our department this summer) to learn from service providers working with refugees in Germany what kind of training best prepared them for their current role, what additional training they would have liked to have received, what the refugees most pressing needs are, and how the providers’ faith has played a role in their coping. This knowledge can be used to better equip future practitioners, agencies and churches as they work to develop programs and interventions that can best prepare service providers to meet needs of refugees.

Why is it important for a community to address issues such as gender discrimination? Gender discrimination is a justice issue. When girls and women are treated as lesser members of society, not only do they as individuals lack the opportunity to be who they were created to be, but the whole society suffers. Imagine, say, half of the United States population dropping out of school simply because they were female. In many parts of the world, the reality is that girls have less opportunity to go to school — something we take for granted — simply because they are girls. Those that do have the opportunity often are taken advantage of. These are also usually the poorest, most impoverished countries in the world. If communities want to thrive, they need to value their girls.