Samford University will honor four outstanding alumni with the university’s 2019 alumni awards. The recipients will be honored during homecoming festivities Nov. 8-9. 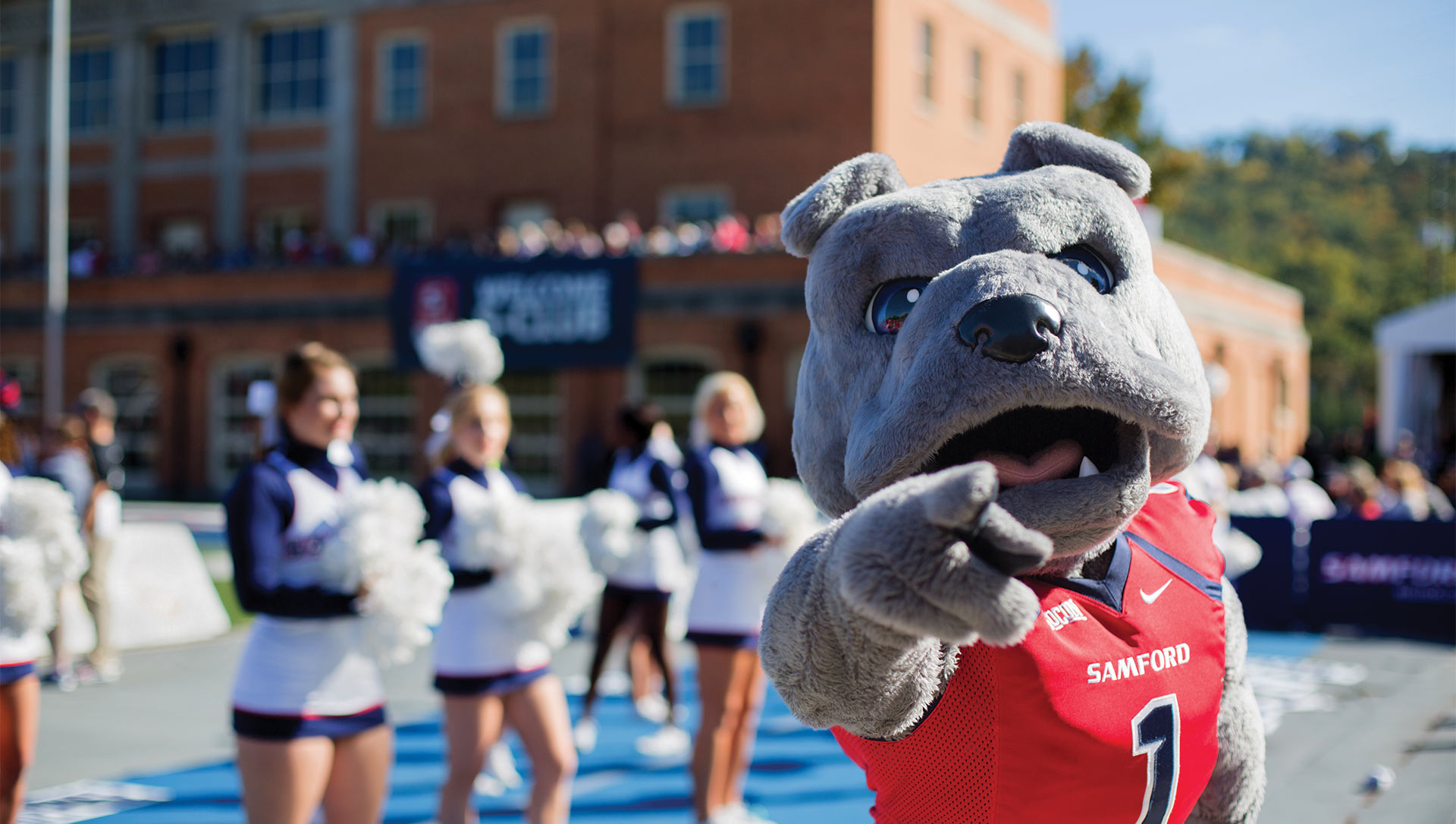 Published on October 16, 2019 by William Nunnelley   Share this on:

Alumnus of the Year: John Floyd

Alumnus of the Year John Floyd has forged a distinguished career as an attorney with Vulcan Materials Company, the nation’s largest producer of construction aggregates such as crushed stone, sand and gravel. Floyd recently completed his 31st year with Vulcan, where he serves as a senior attorney. 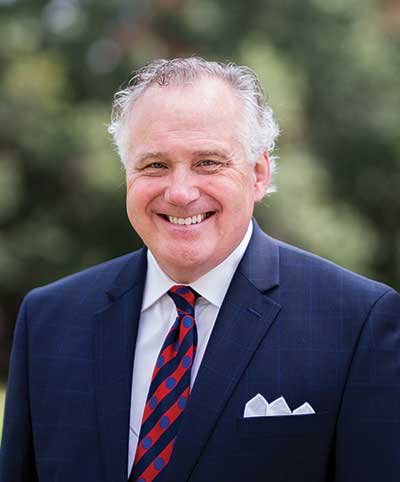 He holds three degrees from Samford: a Bachelor of Science in public administration, a law degree from Cumberland School of Law and a Master of Science in Environmental Management.

Floyd began his Samford career as a music major, but after one semester, he changed fields. “I realized that music was not my vocation,” he said recently. “Music still remains a passion, one that I have continued to this day at church.” He and his wife, Marsha, remain connected to music and happily support Samford Arts.

Floyd said his greatest highlight as a trustee was getting to work with and learn from Samford legends Harry Brock, Gerow Hodges and John Pittman—all trustees—and former president Tom Corts. He said Brock paid him a great compliment one day at an executive committee meeting when he said, “You remind me of a young me.”

Floyd said one of the most important things any trustee body can do is ensure consistent leadership. “I am proud I was on the board when we selected Andy Westmoreland as president of Samford University.”

What program has particularly impressed him over the years?

“Hands down, the College of Health Sciences,” said Floyd. “It is one of the many jewels of Samford University.”

Floyd said he was honored to be selected Alumnus of the Year, “and knowing the long list of others who have received this award, it is also overwhelming.” He added, “I can never repay Samford for what it has done for me. It is truly a world-class institution that shines like the sun.”

Floyd said he would be remiss if he did not shout-out to his favorite professor and adviser, retired history professor Don Wilson. “He molded me, informed me, challenged me and educated me in so many different ways.”

Floyd and Marsha met at Samford on their first day in class as freshmen. They are parents of two grown sons, Harrison and Hampton—a Samford senior majoring in public administration. They are also co-chairs of the Forever Samford parents campaign.

Randall Woodfin, a 2007 graduate of Samford University’s Cumberland School of Law and a member of Samford’s Board of Overseers, was elected the 30th mayor of his hometown, Birmingham, in 2017. 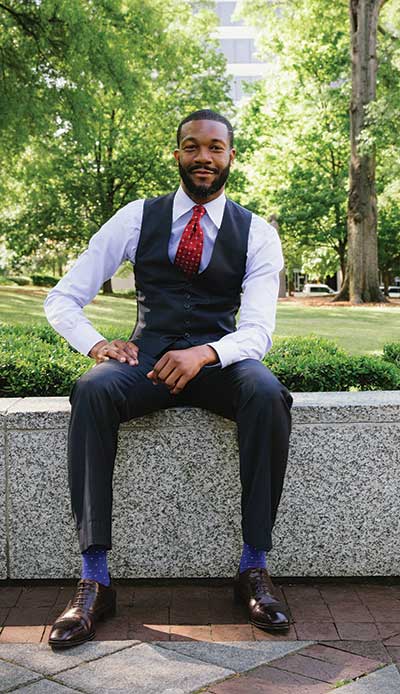 What part of his mayoral campaign did he enjoy the most?

“That’s easy,” Woodfin said this summer. “There was nothing more glorifying than knocking on doors and talking to senior citizens about their issues and how, as mayor, I could address those concerns.”

Service has been a way of life for Woodfin. Indicative of this was his work in helping form Samford’s Black Alumni Association and his service as a member of the Birmingham Board of Education. His interest in pro bono work was one reason he chose Cumberland as his law school.

“Cumberland was one of the two top schools on my list,” he said. “But what pushed Cumberland to No. 1 was seeing their program and their focus on community. They have a heavy focus on giving back. In my law school application, I talked about the school’s mission and how it connects to my personal mission of being a servant leader.

While he was a student at Cumberland, Woodfin volunteered through a nonprofit program that partnered with Jefferson County Family Court.

“We visited high schools to talk about the law. During my time with high school students, I knew that becoming a lawyer was not just about making money or name recognition. Being a lawyer was about giving back on the skills you gained so that you could help someone not necessarily able to afford your legal services.”

Providing service to citizens has characterized Woodfin’s term as mayor. When he arrived, Birmingham had neighborhoods that needed help. Two years into his term, his administration has tackled blight, put money toward paving streets, worked to increase healthy food options for residents and focused on improving workforce development for the younger generation.

Jewel Littleton-Williams knows the value of a Samford scholarship. The only way she could live on campus as an undergraduate was with the aid of a minority scholarship from Orlean Beeson School of Education that assisted her with tuition, room and board. That’s one reason she has worked over the years to support such benefits. 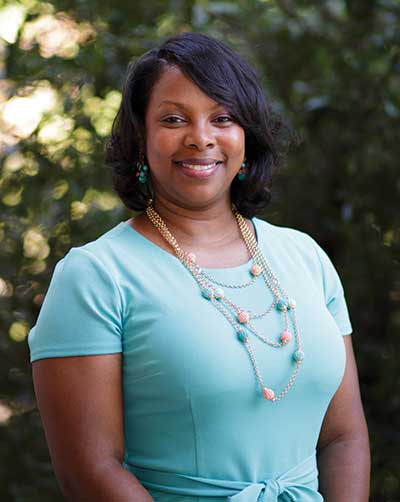 “I began the Reverend John T. Porter Minority Scholarship while an undergraduate at Samford because I wanted other minorities to consider attending Samford,” she said. She worked with then-president Thomas Corts to establish what became the Porter Scholarship.

Littleton-Williams “nickel and dimed” her way to raise the first $15,000 to endow the scholarship through selling candy and doughnut coupons and with donation support from her family, friends and church members. Samford faculty members helped her raise funds by donating through their paychecks regularly. Samford education school advancement officer Sheri Ransome worked with her in this effort.

Littleton-Williams has continued to support the scholarship over the years, and was elated to learn this year that it had surpassed the $100,000 mark.

Littleton-Williams earned her bachelor’s degree in early childhood, elementary, and special education from Samford in 2005 and her Master of Science in Education in 2010. A National Board Certified Teacher, she has taught multiple grades on the elementary level including special education, has been an assistant principal and principal, and served as a turnaround specialist at a middle school.

She also serves as president of Samford’s Black Alumni Association and as a member of the school’s Board of Overseers. She is chief education officer of Learning Little People, LLC, which she founded in 2013 to provide professional learning opportunities for educators.

Littleton-Williams was named director of educational advancement in the mayor’s office of the city of Birmingham earlier this year. She acts as liaison between the city and Birmingham City Schools. She described her role as “bringing the voice of educators to the table when determining the educational policies and initiatives the city will employ on behalf of families in Birmingham.”

Littleton-Williams said she was “humbled” to be named Samford Young Alumna of the Year. She said her Samford education and the Christian foundation her family instilled in her shaped her into the woman of God that she is today.

“I live my life in service to Christ by serving marginalized communities with all that I have,” she said.

Humanitarian of the Year: Meredith Toering

When Meredith Toering’s parents adopted a young child from China with a complex coronary heart disease, their action inspired Toering to make a decision of her own. 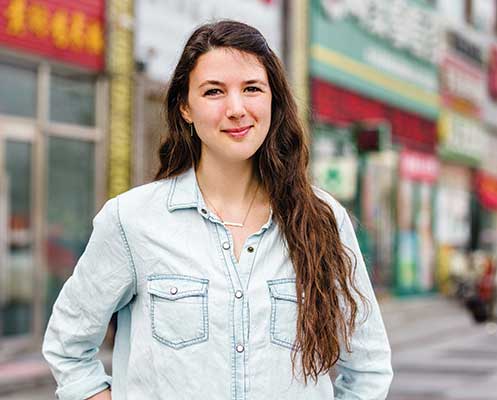 ”I decided that I wanted to make sure that children with heart defects all over the world had access to high-quality heart surgeries and medical care, just like my sister, Brooke,” she said.

Her decision ultimately took her to Iraq, where she worked with the Preemptive Love Coalition, and then to Beijing City, China, for work with the Morning Star Foundation, which she serves as international director.

The Morning Star Family Home takes in orphaned and abandoned children who suffer from severe congenital and acquired heart disease. Toering works directly with these children in need of love and care.

“Taking NGO/social entrepreneurship specific courses with Dr. [Jeremy] Thornton was instrumental to my understanding of how my business degree could be uniquely used in the nonprofit industry,” she said.

Following graduation, Toering worked at the International Justice Mission in Washington, D.C., as a donor relations intern and a development coordinator.

She has been with Morning Star for five years. She says the healing home is at a stable capacity and is now working with “an ever-expanding network of hospitals and orphanages across China, providing more training, more resources and more surgeries for families and children born with coronary heart disease.”

Toering said she was “honored and excited” to be named Humanitarian of the Year. She added she was grateful not just for the four years she spent at Samford but also for “the continued vested interest the faculty and staff have had in my life over the last several years.” She added that she was also grateful “for the classes I took that pushed me and grew me, and for the relationships formed that have made me who I am today.”
Samford is a leading Christian university offering undergraduate programs grounded in the liberal arts with an array of nationally recognized graduate and professional schools. Founded in 1841, Samford is the 87th-oldest institution of higher learning in the United States. The Wall Street Journal ranks Samford 2nd nationally for student engagement and US News & World Report ranks Samford 86th nationally for best value. Samford enrolls 5,729 students from 47 states and 30 countries in its 10 academic schools: arts, arts and sciences, business, divinity, education, health professions, law, nursing, pharmacy and public health. Samford fields 17 athletic teams that compete in the tradition-rich Southern Conference, and ranks 1st nationally for its Graduation Success Rate among all NCAA Division I schools.