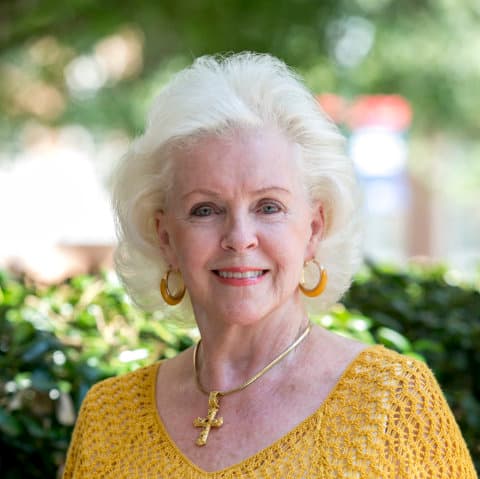 Retirement for education professor Charlotte Freeman is “uncharted territory, full of mystery and surprises,” she said this spring. Freeman retired in May after 47 years on the job.

“My career goal, like many educators, has been to make a difference toward the advancement of students, department and the university,” she said. “I will miss working with students, watching them grow and mature in all areas of development.

“Fundamentally, it is the nature of an educator to want to make a difference in the life of a student.”

Freeman, who held the endowed chair, Orlean Beeson School of Education, Department of Teacher Education, said the classroom has been her comfort zone. “I can sit in an empty one and be embraced with left over student energy that came before and that which will come after I leave.”

Freeman said one highlight of her career was being asked by then-dean Al Garner to design the layout of the second and third floors of the newly-proposed Orlean Beeson School of Education building in the 1970s. She worked with the contractor and several others to do so.

As director of testing, she headed a program that administered thousands of standardized tests to members of the community. The most impressive number was the more than 46,000 ACT exams provided to high school students.

Another highlight was being honored with three teaching awards including the John H. Buchanan Award for Excellence in Classroom Teaching in 1985.

On a lighter note, Freeman well remembers being asked to “mud wrestle” dean of students Martha Ann Cox during an event to raise money for fall missions. She agreed to do so with much trepidation. “It raised more funds than any other event,” she recalled.

Freeman said the most significant changes in her field were the continuing impact of technology and the requirement of teacher performance assessment to answer whether new teachers are ready for the job.

“And, of course, the shift to online education providing options like nothing prior.”

Freeman said she believed the path that led her to Samford from graduate school at the University of South Alabama to be “divinely directed” and she was very thankful she had taken it.