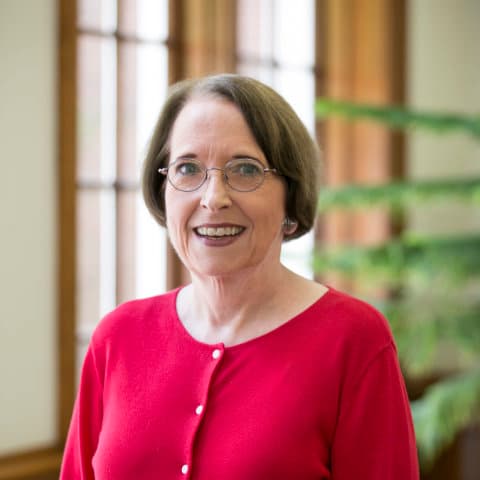 Catalogue librarian Rebecca Hutto saw extensive changes in her field during her 41-year career in the law library of Samford’s Cumberland School of Law. She began at the law library before online systems were available.

“The initial automation was a highlight,” she said. “The technical services department was the first area of the law library that was impacted, and we were responsible for helping implement the first online library system.”

Hutto said planning and moving into the new law library building “was definitely a highlight” of her career.

“So much work was involved in the planning of the building and the moving of the books, and to see the final product was quite an exciting time.”

The Lucille Stewart Beeson Law Library opened in 1995 and former President Gerald R. Ford was the speaker for the occasion.

Hutto retired Dec. 31, 2019, saying she would miss working with law students, law professors and future lawyers. “I have been blessed to have been a small part of Samford and the law library,” she said.

As for retirement, “I have a lot of ideas and plans including travel, but right now I am enjoying being home with my dogs on rainy Monday mornings.”