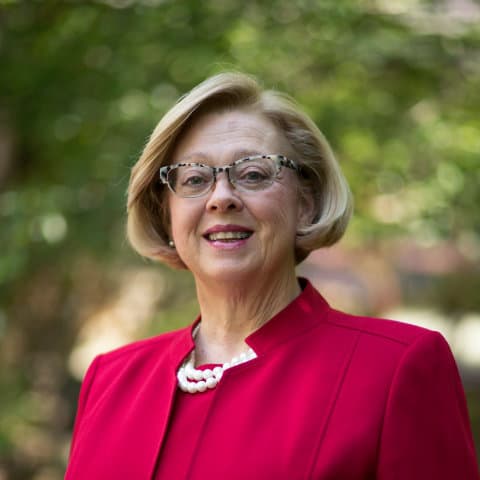 Nena Sanders has been an important part of a world of change during her 21 years in Samford University’s nursing and health sciences programs. She has seen Ida Moffett School of Nursing grow from multiple perspectives including by reputation locally, regionally and nationally. As vice provost and professor since 2013, she has led the establishment of the College of Health Sciences, working with administrators and faculty to establish Schools of Health Professions and Public Health and over 20 new degree programs in health care professions.

“I have enjoyed working with so many talented and kind individuals during my tenure at Samford,” she said. “I have enjoyed the relationships and networks that have developed as a result of my time here. Actually, the people are the reason I stayed at Samford.”

Sanders said nursing highlights have included seeing the undergraduate nursing program transition from an associate degree program to a Bachelor of Science in Nursing, expansion of graduate degree programs, seeing the school recognized as a Center of Excellence by the National League for Nursing and pioneering in online instruction for nursing graduate programs.

The College of Health Sciences highlights have included, in addition to the new degree programs, knowing that they “will prepare thousands of future graduates to touch tens of thousands of patients and families improving the delivery of care and resulting patient care outcomes.”

Sanders said her plans for retirement include focusing on her faith, family, profession/health care and community. She plans to serve her church by teaching a women’s Bible study, assisting in establishing a women’s ministry and participating in missions and outreach. She plans travel with family to the beach and mountains. She plans to continue to serve the nursing profession and her community by remaining active on health system boards.

“I want to renew my involvement in some of my favorite hobbies such as sewing, cooking and traveling,” she said. “One of my goals is to start quilting and another is to teach oriental cooking.”