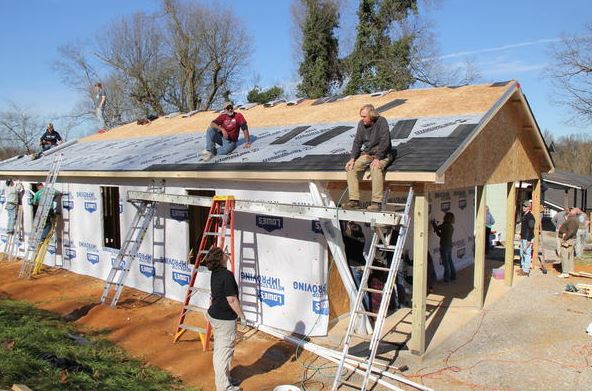 Samford University students traveled to Pratt City to help build a house as part of the “Business and Local Poverty” course that is offered during the university’s Jan Term.

The class explores the issues of poverty through a hands-on learning approach. Students visited multiple poverty relief organizations during the course, but last week they had the opportunity to participate in a housing project with Christian Service Mission (CSM).

“They had a large oak tree that hit the master bedroom and was still protruding through the roof,” Parsons said. “They had a tarp over it, but it leaked. It was horrible.”

The house is home to a family with a 16-year-old daughter who excels in school and aspires to go to college. They lived in the house under its damaged condition until the summer of 2015, when CSM had enough funds to demolish their former residence and build a new house.

Barbara Cartledge, professor and assistant dean of academics in Samford’s Brock School of Business, has taught this Jan Term course for the past six years. She hopes to show students that alleviating poverty takes time and commitment. “It’s not just providing relief, which is fixing the roof or putting a tarp over it, but it’s [providing] a long-term place of development,” Cartledge said.

David McTier, a senior management major from Grayson, Georgia, said that the course has changed his perspective about how business can help fight poverty.

“I thought that businesses would just give money, and that was the end of it,” McTier said. “But there’s so much more that business can do when it comes to community development.”

Parsons is a 1986 graduate of Brock School of Business, and he believes that serving in an unfamiliar environment gives students a better perspective on how they can help others.

“If you’re doing a business in areas with poverty, it’s important to learn who you’re working with, how they live and what is important to them,” Parsons said. “You need to know those kinds of things to be able to help them and their communities.”

At the end of Jan Term, each student will present an analysis on a certain aspect of the course.

“We’re able to graduate and have these experiences, so when we are in the working world, we can replicate what we experienced in college,” McTier said.

Rachel Sinclair is a journalism and mass communication major and a news and feature writer in the Office of Marketing and Communication.