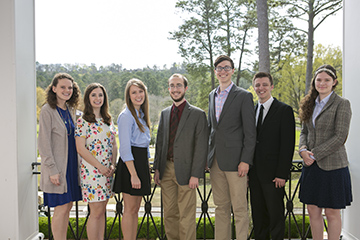 Eleven Samford University students have been honored by the Birmingham Center of Colonial Dames of America for outstanding papers written in Samford history classes. The winners received cash prizes for their work submitted in the annual Colonial Dames’ American Independence essay contest.

Hannah James, a senior history and religion major from London, Kentucky, won the first place prize of $600. Her paper was entitled “For the Kingdom of God or for the Kingdom of Man? American Indigenous Societies and Their Alterations of Environmental Practices during Colonization, Sixteenth to Mid-Eighteenth Century.”

Morgan Roettele, a junior history major from Naples, Florida, won second place and a $500 cash award for her paper, “The Columbian Patriot: The Intellectual Achievements and Political Voice of Mercy Otis Warren.”

William Higgins, a junior political science and classics major from Knoxville, Tennessee, won third place and $400 for his paper, “It Started with Paxton’s Case: An Explanation and Analysis of the Weak Legal Cases and Political Rhetoric That Founded the United States.”

Sam Fink, a freshman from Fayetteville, Georgia, won fourth place and $400 for his paper, “The Hero of Two Worlds.”

Trevor Waldrop, a junior classics and history major from Birmingham, won fifth place and $300 for his paper, “The Exile of Thomas Hutchinson.”

Nicholas Kromann, a senior history major from Huntsville, Alabama, won seventh place and $300 for his paper, “Loyalism and Its Consequences: The Tribulations of Thomas Hutchinson.”

A collection of the winning papers was dedicated to Kathryn Hicks Porter in recognition of her service as Colonial Dames president. A bound volume of the essays will be housed in the Samford library.