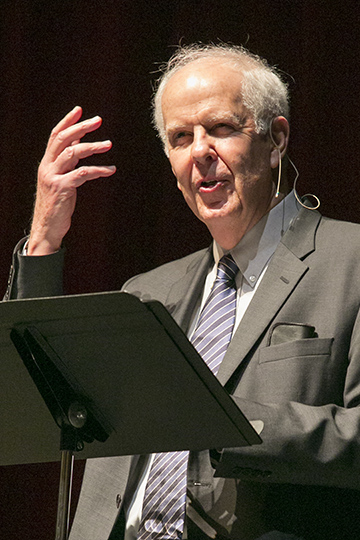 Palmer discussed themes found in his latest book, Healing the Heart of Democracy: The Courage to Create Politics Worthy of the Human Spirit. His lecture examined the political rhetoric that has emerged in the United States and how society needs to respond with active civic involvement to better hold leaders accountable.

From start to finish, Parker explored the concept of democracy through realism and hope rooted in his own experience and in American history. He ended with closing remarks and a question: “Is American democracy dead or alive? It’s in our hands.”

The Tom and Marla Corts Distinguished Author Series was launched in 2011 to highlight reading and literacy, and to provide endowment support for Samford’s Orlean Bullard Beeson School of Education. The series honors the late Thomas Corts, who served as Samford’s 17th president for 23 years, and his wife, Marla, a former high school English teacher and nurse.