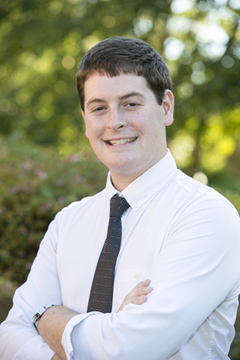 “Sam has consistently demonstrated the ability to combine excellent work in his discipline with a broader concern for the ethical questions that any serious study inevitably raises,” said Scott McGinnis, a Samford religion professor and campus Lilly Fellows Program liaison. He noted that it is rare for one of the 100 Lilly Network Schools to have even one Lilly Fellow every few years. “To have two in a row is extraordinary indeed,” he said.

The prestigious fellowship, part of the Lilly Fellows Program in Humanities, supports three years of graduate education for exceptionally well-qualified young graduates of LFP Network Schools who seek to become teacher-scholars at church-related colleges and universities in the United States.

Hahn, who was a Rhodes Scholar finalist in 2016, has felt that calling for many years, thanks in part to the influence of his father, Kenneth, former academic dean of the Cambridge School of Dallas, Texas. “Watching my father honestly integrate faith and learning in the classroom instilled in me a passion for Christian education from a young age,” Hahn said.

The Cambridge School of Dallas also provided Hahn with the classical academic foundation for his success at Samford, where he has taken a special interest in ancient Greek literature. He will continue that focus as he pursues a Ph.D. in classics at the University of Colorado–Boulder, where he earned a Thomas Edwin Devaney Fellowship in addition to the Lilly honor.

The Lilly Fellows will gather at an inaugural conference Aug. 1–4 in Indianapolis, Indiana, where they will meet their program mentors, Gretchen J. Van Dyke of the University of Scranton and Douglas Henry of Baylor University. The Fellows will then embark on a long-distance colloquium, engage in one-on-one mentoring relationships and participate in three additional conferences.

“The prospect of participating in this interdisciplinary group of Christian academics encourages me as I prepare for graduate school,” Hahn said. “I cannot express my gratitude to Drs. Scott McGinnis and Joel Davis for helping me, and to the Classics Department and the University Fellows program for fostering my intellectual development.”

Davis, a 2005 graduate, was Samford's first-ever Lilly Graduate Fellow. He is now on the music faculty of Samford's School of the Arts.