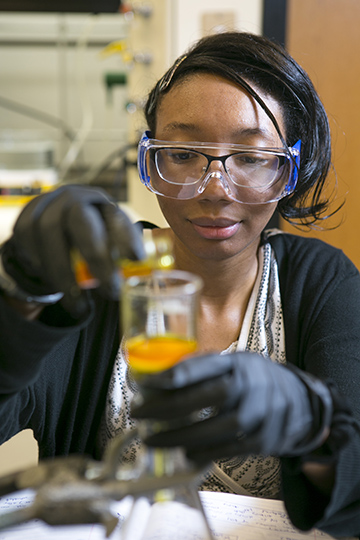 Samford University prepharmacy major Jasmine Willis hopes to one day create new drugs that will help people. Although yet to begin her sophomore year, the young scientist is using her summer to learn about the research involved in that calling.

“I hope to go into research pharmacy after I graduate and work on creating new drugs, so I thought that being on a project to make new compounds would be excellent training for the future,” said Willis, who is researching first-row transition metal catalysis with Samford chemistry professor Dale Wilger.

“Additionally, synthesizing catalysts that have never been isolated and analyzed before sounded like a unique and exciting challenge,” Willis said.

Willis is among several dozen Samford students who are conducting summer research on topics that range from elections held in Rome, Italy, more than 2,000 years ago to the role that religion and racial bias play in predicting the concerns and fears of current-day Americans.

Many students in health science fields are pursuing research in various areas of pharmacy, health professions and public health. One “plate waste study” looks at how much food being served in Birmingham area children’s summer nutrition programs is actually being eaten.

Willis and Wilger have spent much of June and July creating and analyzing compounds for use as potential catalysts. One, a promising triphenylphosphine cobalt fluoride compound, was among six samples Willis recently took to a University of Alabama at Birmingham lab for analysis via nuclear magnetic resonance spectroscopy. That verdict is still out.

“By the end of this summer, we hope to have successfully isolated some cobalt fluoride catalysts, obtained crystal structure and NMR spectra of them, and shown their activity in catalyzing chemical reactions,” explained Willis, who appreciates learning what it’s like to work in a research lab “in the real world.”

“We work eight hours or more a day and are paid hourly, so it’s an excellent simulation of a real job,” said Willis, whose internship is supported by an Alabama Power Foundation Research Fellowship and other sources.

Moreover, said the Huntsville, Alabama, resident and member of Samford’s University Fellows program, summer research can be especially productive because students aren’t balancing research with classes, homework, and clubs like during regular terms.

Wilger, who joined the Samford chemistry and biochemistry department faculty in 2015, said that for professors, the advantages of summer research are many. For one thing, students work full time over the summer instead of only a few hours a week as during a regular semester.

“Plus, with lighter teaching loads, we get to work in the lab side-by-side with the students.  This leads to more teaching opportunities and more productive research,” Wilger said, adding that the students also learn aspects of scientific writing.

Beyond the Science Lab

Classics and English major Stone Hendrickson can most days be found in the library researching material for his project on winning and losing elections in Cicero’s Rome.

His summer research builds on an earlier Latin course study of Pro Murena, the classic speech that Cicero gave in defense of a client who had been accused of bribing voters in an election for consul.

“Ultimately, I hope to use a close reading of the entire Pro Murena, combined with extensive research, to come to a better understanding of some aspects of Roman elections,” said Hendrickson, who hopes to produce a research paper of about 3,000 words and a shorter version for possible conference presentation and publication. He works with classics professor Douglas Clapp on the project.

While his studies have “provoked many interesting conversations” regarding the upcoming 2016 presidential election, Hendrickson said he does not plan to address modern elections in his research.

Since most of his research involves reading books or published articles from internet databases, Hendrickson finds the Samford library to be an excellent place for research.

“Its services are fully functioning in the summer, and the low level of student traffic makes for a quiet and ideal study location,” said Hendrickson, who appreciates Samford’s Inter Library Loan program, which he deems essential for his level of research.

A junior from Edmond, Oklahoma, Hendrickson is a University Fellow and recipient of an Alabama Power Foundation Research Fellowship that supports summer research for Samford students.

The two are analyzing the Chapman Survey of American’s Fears, a national dataset that surveyed Americans in 2014 about their fears and worries over personal as well as national and global issues such as crime, terrorism and the economy.

Although in the early stages of defining their concepts and gathering literature, they hypothesize that racial bias will predict micro fears such as those related to crime and personal safely, Davidson said.

“We hope to find some answers, but more than anything, begin a dialogue about the role of fear in affecting public policy attitudes and voting behavior,” Davidson said.

“We’re currently developing the theoretical framework for our project, which is proving to be more tenuous than anticipated, but I have still enjoyed the process,” said Bonheur, who finds the plethora of data that is available through sources such as Google Scholar and the Samford library database to be “pretty cool.”

While Bonheur doesn’t claim one particular “lightbulb” moment thus far in the analysis, the offensive lineman for the Samford football team admits, “This process is far from over.”