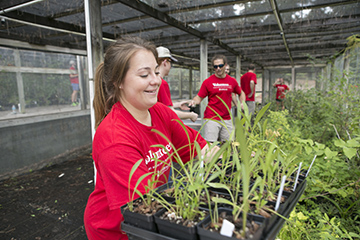 Mackenzie Luce, a first-year student at Samford University’s Cumberland School of Law, spent the last day of her law school orientation at Grace House Ministries, a Birmingham organization that provides residential housing and programming for girls who have been abused, neglected or abandoned.

“First-Year Service Day at Cumberland embodies the heartbeat of this school,” said Luce, who is from Dallas, Texas. “The day was evidence of Cumberland’s commitment not only to train us to become great lawyers, but also great men and women of service and selflessness. It was a reminder that we are called to use our skills to serve and care for the community around us, and to see the people around us as opportunities to humbly love and support each other through our time and knowledge.”

Established in fall 2007, the First-Year Service Project is now a tradition during student orientation at Cumberland School of Law. To conclude traditional orientation events, the first-year class embarks on a group service project on the last day of orientation. The first-year class and employees provide hundreds of volunteer hours in one afternoon to community service projects at various locations around the Birmingham area such as nature preserves, state parks, local ministries and nonprofit organizations.

This year’s First-Year Service Day began with a breakfast and welcoming remarks from law dean Henry C. “Corky” Strickland III , as well as an introduction to ethics and professionalism from the Hon. Albert P. Brewer, former governor of Alabama and Distinguished Professor of Law and Government. The students also received information about the school’s Public Interest Program offerings from Cassandra Adams, assistant dean of Public Interest Programs. After lunch, law students and employees proceeded to their respective community service projects around town.

“The First-Year Service Project is the perfect cap to orientation and an appropriate launching point for the start of our students’ futures as servant leaders,” said Adams.  “Although attendance is optional, the majority of our first-year students choose to descend upon our community every year, draped in their red Cumberland volunteer shirts, and present a true picture of our values here at Samford University.  As I said to the Class of 2019 after their hard day of work, ‘you are already making a difference!’”

Through its Public Interest Program, Cumberland School of Law offers many legal and nonlegal public interest and pro bono volunteer opportunities for students. In addition to the First-Year Service Project, students can participate in the Help the Homeless Program, Pro Bono Week, Project Homeless Connect, the school’s Community Mediation Center and Public Interest Fellowships, among many other activities sponsored by the student-led Public Interest and Community Service Organization throughout the year.