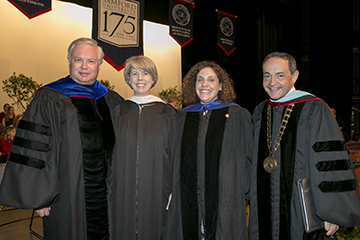 A political science professor who began her career as an assistant in the debate program, Marissa Grayson, received Samford University’s John H. Buchanan Award for Excellence in Classroom Teaching in the opening convocation of the fall semester Tuesday, Aug. 30.

The award goes annually to an outstanding faculty member chosen by a student and faculty committee from nominees submitted by the graduating senior class. The award is named for a former longtime trustee of the university.

Grayson, a native of Chicago, Illinois, joined the Samford faculty in 2010. Prior to that, she was an assistant in Samford’s debate program and an instructor at its Summer Debate Institute. She currently leads the university's pre-law program.

“What she enjoys most about Samford is the interaction with students and the emphasis placed on faculty-student relationships,” said Samford Provost Michael Hardin in presenting the award. “She likes how students at Samford are inquisitive and motivated, and how they want to be challenged inside and outside the classroom.”

Grayson has served as cochair of the 2011 Alabama Political Science Association annual meeting, Model United Nations faculty adviser, assistant debate coach, chair of a search committee, and lecturer and director of debate. Outside the classroom, Grayson is active in civic and charitable concerns, and enjoys politics, travel and college football.

The director of graduate admission for Howard College of Arts and Sciences, Beth Smith, received a second award presented at opening convocation, the Bill Nunnelley Award. The award recognizes outstanding job performance by a nonfaculty employee whose work regularly and consistently exceeds expectations, and reflects a high level of service, trustworthiness and respect. The award is named for a longtime employee of Samford’s news and communication office.

In addition to her role in arts and sciences graduate admission, Smith has added additional tasks over time. She also works with students in the Fifth-year Nontraditional teacher certification program and the Environmental Management Master’s Program to assist with recruiting and advising.

She initiated a summer speaker series for students in both the environmental management and the Research Experience for Undergraduates programs.

“She has been able to convey with enthusiasm the benefits of both graduate programs and to help students navigate various admissions pathways,” said Hardin. “One of her strongest characteristics is her eagerness to learn and pass her learning on to others. Most of her students will go away much changed because of her willingness to help them become who they want to be.”