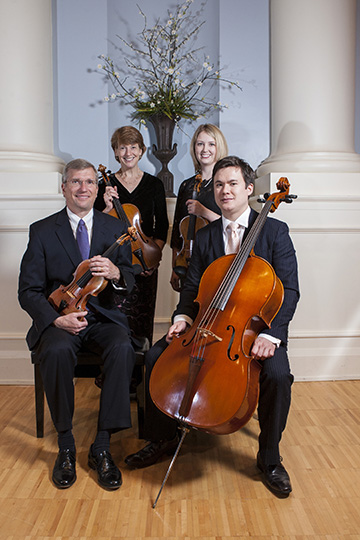 Samford Arts will be featured on one of the world’s most famous arts stages in October when the Samford String Quartet performs Oct. 24 in Weill Recital Hall at Carnegie Hall. The performance is at 7:30 p.m.

School of the Arts Dean Joseph Hopkins will be a guest soloist with for the Carnegie Hall recital, and the program will include works by composer Joel Scott Davis, assistant professor of music.

Hopkins has invited Samford Arts friends, faculty, alumni and students to join the festivities around this premiere performance of the quartet. In addition to the Carnegie Hall event, Hopkins will host the group for a tour of the city and a postperformance reception at the world-famous Tavern on the Green.

Trip information and registration is available online. Tickets for the performance are available online with a Samford discount using SAM24743. A block of rooms has been held at Le Parker Meridien Hotel. Hotel reservations can be made online or by calling 800-543-4300 to confirm bookings. Guests must reference Samford University when booking to receive the rate.

The Samford String Quartet was formed in 2011 and first performed in England and France. Comprised of two married couples — Angela and Jeffrey Flaniken (viola and violin) and Caroline and Samuel Nordlund (violin and cello) — the musicians are faculty members of Samford’s School of the Arts. They also have held positions with several symphony orchestras and regularly play at music festivals.

In February, Samford announced a $1 million endowment for the strings program provided by Wilton Bunch and Victoria Dvonch of Birmingham. Bunch and Dvonch have been longtime supporters of Samford Arts, an affinity that grew from Bunch’s experience playing bass in the Samford Orchestra.

In addition to the New York recital, the quartet will perform this fall at Auburn University, a send-off concert at Samford and other Birmingham venues.