Published on September 26, 2016 by Olivia Williams   Share this on: 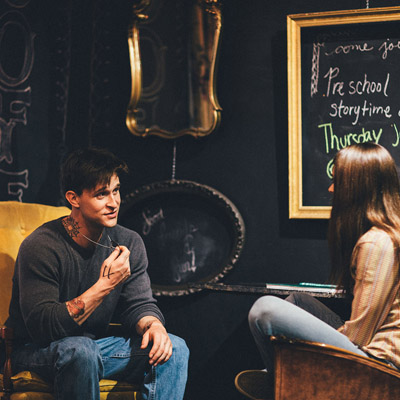 Samford journalism and mass communication alumnus Ben Davies plays the role of Nathan Ballard in a new film about the Columbine High School shooting of 1999. Ballard was a friend of Rachel Joy Scott, one of 12 students killed in the shooting and the subject of the film, I’m Not Ashamed (opening Oct. 21).

In the years that followed that tragic day, Scott’s mother Beth Nimmo and countless others have worked tirelessly to honor the 18-year-old’s legacy — the story of a young woman who lost her life while defending her Christian faith.

“Rachel’s story is a story of love and compassion,” said Davies. “It’s extremely entertaining and moving, but it also could change your life. There’s so much in the movie that people could take away from it.”

Davies’ character Nathan is a homeless teenager. To prepare for the role, Davies spent an afternoon in the streets of Nashville to see what it was like to live homeless for a day.

“I remember this feeling of hopelessness,” Davies said of the experience. “For the first time, people were avoiding me.”

Davies said he didn’t have the heart to ask people for money, however he’ll never forget one moment. As he was sitting on a street corner, a young woman passed by him as she left an ice cream shop.

“She looked at me and smiled, and she kept walking,” he said. After an emotional drive home, Davies knew he was ready to play the role of Nathan.

“It took his character to a whole new level,” he said. “There are few people who go through life to serve people and love people like God loves them; my character is living on the streets, and Rachel tracked him down in the alleys and brought him to church.”

Davies has starred in many films over the years, including War Room, Rumors of Wars and Courageous, but he says this project was different. Much of the dialogue provided for the script in I’m Not Ashamed came from Scott’s personal journal.

“It’s not a secondhand account from a friend or parent; this is a firsthand account from her mouth and writing,” he said. “It is so beautiful where God takes a flawed society and a girl who struggles through so many things, and how Christ works through it.”