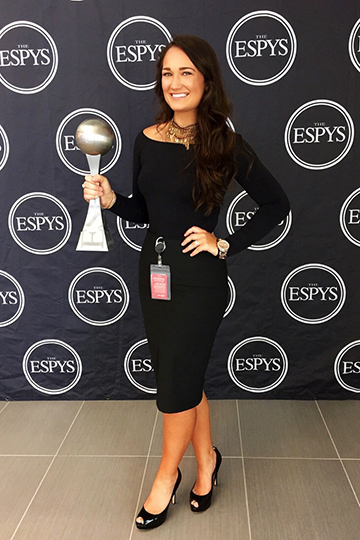 Samford University senior Grace Bowes did not know what to expect when she landed a coveted ESPN internship last summer.

Bowes secured her spot with the sports broadcasting business after eight interviews and a sports knowledge exam. Before pursuing the internship with ESPN, she had the opportunity to meet and spend time with Ben May, senior director of sports management at ESPN/SEC Networks. May is an advisory board member of the Brock School of Business Sports Marketing Program headed by Darin White, chair of the Department of Entrepreneurship, Management and Marketing.

“This once-in-a-lifetime opportunity would not have been possible had it not been for the partnership we have with key executives who serve on the Brock School Sports Marketing Program Advisory Board,” White said. “Ben May originally opened the door for Grace last fall after he spoke to a sports marketing class. We are so thankful to executives from the world of sports like Ben who give of their time and resources to help make our students’ dreams come true.”

After Bowes shadowed a senior executive producer of ESPN College Game Day last September in Tuscaloosa, Alabama, the wheels were put into motion for the internship at ESPN.

“I was very persistent in pursuing the internship position with them,” said Bowes. “I received my offer last April in as a professional sales and marketing intern at ESPN after going through the steps of following up and waiting.”

Bowes worked at the ESPN headquarters in Bristol, Connecticut, where she said no two days were alike as an intern. Her main job was to schedule commercials for each of ESPN’s networks: ESPN, ESPN2 ESPNU, Deportes and the SEC Network. She was responsible for making sure the commercials scheduled met the guidelines of the clients’ contracts before they were sent to production for airing. She also got to shadow several popular shows such as SportsCenter, Baseball Tonight, Mike and Mike and First Take. She traveled to the New York City office to work on marketing projects like the ESPYS Award Show, the Major League Baseball Home Run Derby and the Wimbledon tennis championships.

In addition, Bowes competed with a team of four in “The Pitch,” an intern competition within ESPN. Seventy-two interns had to come up with a new business idea, venture or show concept. Bowes’ team presented an idea called E-Games that would bring together the largest gaming competition featuring the best video and digital gaming professionals from around the world to compete annually. All of the intern teams presented to higher-level executives within ESPN first. Then the top five interns made final presentations to  vice president–level executives.

“Out of 24 teams, my team tied for first place, and our idea may be branded and implemented by ESPN,” Bowes said.

Bowes said it was difficult to pick just one aspect of the internship that she loved most because for her, “working at ESPN was a dream come true.”

She added the atmosphere that ESPN provided interns and its willingness to make sure interns had the best experiences possible was what made it the “worldwide leader in sports.” Bowes interacted with many key players, including John Skipper, ESPN president; Ed Ernhardt, president of global sales and marketing; and on-air talent Lindsey Cznariak and Scott Van Pelt.

Bowes also came up with ideas for College Game Day that are being implemented in the new season.

“This was truly the experience of a lifetime, one that I am very proud of,” she said. “If you had asked me three years ago if I would be living my dream, I probably would have said, 'I am not sure, but I am going to work my hardest to make it happen.' It shows how dedication, hard work and persistence can pay off when you’re determined to making your dream a reality.”