Samford Guests Offer Glimpse of Life in the White House 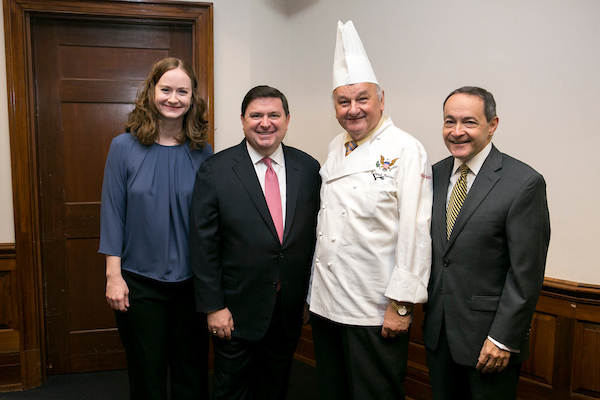 The nonprofit, nonpartisan organization McLaurin leads was founded in 1961 by first lady Jacqueline Kennedy. “She had the wisdom and foresight to realize that what she needed, other first ladies and presidents would need over the course of time,” McLaurin said. The White House Historical Association became a private partner to provide funding to preserve the White House as a museum, and acquire art and furnishings for its collection. The organization also offers educational programs, publishes books and a quarterly journal of White House history, and even acquires the White House’s china, an example of which McLaurin passed around during his presentation.

The White House china carries exceptional food, of course, and chef Mesnier helped set that standard in 26 years of service to the first family and their guests. At Samford, he offered a rich buffet of anecdotes, from the favorite dishes of the presidents to the terrifying moments of Sept. 11, 2001, when staff were told that a plane would crash into the White House in 10 minutes. Mesnier said that few realize that his staff on that morning was in the final stages of preparation for the annual Congressional Picnic to take place that day, essentially gathering the entire government on the South Lawn.

Most times were happier, and the White House staff always bonded with the family they served. Even the presidents let down their guard around those who managed daily life. “I’ve seen them laugh and I’ve seen them cry,” Mesnier said.

Mesnier’s time at the White House is all the more meaningful to him because he joined the staff as an immigrant noncitizen and then earned his citizenship with the help and encouragement of first lady Rosalynn Carter. “I left my home one morning as a French man, and returned the same evening as an American citizen,” Mesnier said. “Only in America can you get such a gift.”

No matter which family next comes to live in the White House, McLaurin said that on Jan. 20, the work of the house will continue without interruption or partisan rancor. And, if the staff of the new administration should feel that history begins with them, his organization helps provide some historical perspective. Waiting at each desk in the White House on that day of change are descriptions of all the people and issues associated with that space over the decades. “We want to give them some historical context as to those who’ve gone before, so they have that connectivity with the rich history of the White House.”