Nunnelley Honored As Ambassador for Samford and JMC Program 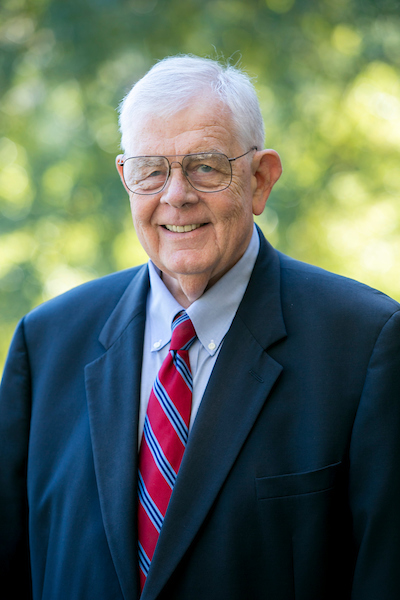 At homecoming 2016, Samford University’s Department of Journalism and Mass Communication added to its alumni Wall of Fame longtime Samford employee William A. “Bill” Nunnelley. He now shares that honor with his wife, classmate, fellow journalist and 2008 inductee, Carol Fishburne Nunnelley ’65.

The homecoming Saturday event highlighted Bill Nunnelley’s distinguished career, which has included more than a half-century of service to Samford. He joined Samford’s staff in 1964, and currently serves as senior editor and director of public relations in the Division of Marketing and Communication.

JMC chair Bernie Ankney recalled first meeting Nunnelley in 2006, when the veteran journalist recounted the JMC department’s distinguished history. “I was immediately impressed with Bill’s love of Samford, first and foremost,” Ankney said. The chair came to respect Nunnelley’s “outstanding skills as a writer and editor” as well. “Bill loves Samford,” Ankney said. “Bill devoted his life to Samford. He is a terrific ambassador for Samford and the JMC department.”

Former classmate and 2015 JMC Wall of Fame inductee Catherine Bryant Allen ’64 inducted Nunnelley into the Wall of Fame. “Bill has not only written the Samford story, but he also lived almost one-third of that story,” she said.

Allen and Nunnelley grew up in the same neighborhood near the old Howard College campus in Birmingham’s East Lake community. They knew each other from elementary school, shared journalism class at Woodlawn High School and carried their love of writing to Samford. Both found work in Samford’s public relations office, led by journalism department chair and 2015 Wall of Fame inductee Al Scroggins. Nunnelley also earned a coveted job with the Birmingham Post-Herald newspaper, working the 4 p.m. to 1 a.m. shift that had him “putting to bed” the morning paper.

Nunnelley’s first day with the Post-Herald gave him a front-row seat for the racist violence that was shining a national spotlight on the city. “My first Sunday at work was the day the Klan attacked Freedom Riders at the Birmingham Bus Station, three blocks away,” Nunnelley said. He recalled Post-Herald photographer Tommy Langston, also wounded in the attack, stopping by the Post-Herald office on the way to the hospital. “When I saw him come in with bloody face and torn clothing, I had to wonder what I had gotten myself into with this newspaper job.”

Undeterred, Nunnelley earned his double major degree in journalism and history, and completed his military service in the U.S. Coast Guard before returning to Birmingham in 1964. At home again, Scroggins’ successor at Samford, George Hudson Smith, hired Nunnelley for the first of many positions at his alma mater.

Nunnelley maintained his interest in history, especially the events that were the backdrop of his early career. Decades later, Howard College of Arts and Sciences dean Lee Allen, Catherine Allen’s husband, encouraged him to enroll in the university’s master’s degree program in history. Nunnelley did so, and spent many Sunday afternoons poring over microfilm at the Birmingham Public Library to create the thesis that became Bull Connor, the book that is the standard reference on the life of the notorious Commissioner of Public Safety in Civil Rights Era Birmingham. Nunnelley further explored the era in Fred Shuttlesworth: Civil Rights Actionist, a book for young readers about the leader of the local Civil Rights movement.

Always, Nunnelley has stayed “in the zone,” as Samford President Andrew Westmoreland put it, providing a foundation of balance, faith and excellence in everything he does for the university. In 2013, Westmoreland honored Nunnelley with Samford’s President’s Award for distinguished service, and also announced that it would, henceforth, be the Bill Nunnelley Award.

Now, Nunnelley’s home department formally places him among its most distinguished alumni, many of whom he has known. “I learned a lot about journalism and news writing at Samford, and I’m sure some of it came from my association with these people, all talented journalists and writers,” Nunnelley said. “It’s an honor to be included in the company of these and other Wall of Fame honorees.”