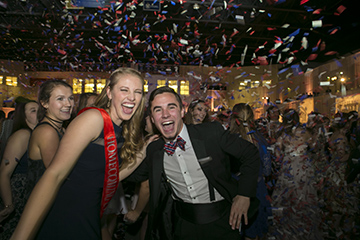 In what was billed as a once-in-a-lifetime event, the Samford University community came together Nov. 11 to celebrate the people and the stories that have sustained the university for 175 years.

“It is difficult to describe the grandness of the Anniversary Ball because there has never before been an event of this scale at Samford,” said Michael Morgan. “With decorations meant to reflect the beauty of Samford’s campus, spectacular light and media, it was difficult to recognize the ‘Pete.’” Morgan, who is executive assistant to the president, chairs the 175th Anniversary Planning Committee.

Alumni representing every decade from the 1940s to the 2010s mingled with students, employees and other friends of the university. Hundreds crowded the dance floor throughout the evening.

“It was a wonderful gathering of the Samford community,” Morgan added. “To see the generations come together to celebrate something we all love and cherish strongly affirms what Samford has meant to individuals and to the world for these 175 years.”

Lori Littlejohn Sullivan, 1979 homecoming queen, said she was having a “grand time” during the celebration. Sullivan noted that homecoming was during basketball season while she was a Samford undergraduate, and “we never had a homecoming like this.”

Margie Terp, a 2016 graduate, came from her new job in New York City and was celebrating with friends Bailey Fuqua ’15 and Rachel Stanback ’15. “I would not have missed this for anything,” Terp said. “This is incredible.”

Several multigeneration families also were on hand to celebrate together.

Chris Blackerby ’88 and his wife, Barbara, of Hoover, Alabama, were visiting with daughter Rachel, a freshman prebusiness major. Rachel is a member of the Samford dance team and grew up attending Samford events.

She noted that it was “interesting and different, but fun” to attend the Anniversary Ball with her parents. Her dad was quick to note that “they never had anything like this when I was in school here.”

During a brief program, the 2016 alumni award recipients were recognized and received commemorative medals from Samford President Andrew Westmoreland.

The 2016 alumni of the year are William Baggett ’57, a longtime higher education administrator from Atlanta, Georgia; Keith Herron ’87, a banking executive from Birmingham; Fred Kingren ’82, a Birmingham attorney; and Anne Glaze Stone ’67, an educator and community volunteer from Huntsville, Alabama.

Katie Murnane ’07 received the Outstanding Young Alumnus award. She is an accountant currently living in Edinburgh, Scotland. She traveled more than 4,000 miles to be present for the ceremony.

Two alumni received the inaugural Humanitarian of the Year award: Carolyn Maull McKinstry, M.Div. ’08, and Stephen B. Moss, J.D. ’68. McKinstry, of Birmingham, has “dedicated her life’s work to the ministry of reconciliation.” Moss, of Boca Raton, Florida, is founder of Mission United that helps veterans with housing, legal assistance and health care.

Also during the evening, seniors Micah Green-Holloway of Birmingham and Margaret Hehir of Atlanta were crowned homecoming king and queen.

The program included a birthday “greeting card” featuring alumni and students. The confetti cannon was a special hit with the students in attendance.