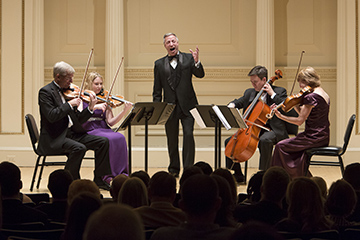 A Samford University ensemble filled Carnegie Hall’s Weill Recital Hall with music recently in a performance that exceeded expectations for the Samford String Quartet and guests. The event drew a diverse audience, including many young Samford alumni in the New York area.

It was a complete success in all aspects, according to Joe Hopkins, School of the Arts dean and soloist for the recital.

“You can’t help but be proud of Samford and the people who bring distinction to this university,” Hopkins said. “We are especially grateful to [Samford arts patrons] Vicki Dvonch and Wilton Bunch for inspiring the entire event by creating the Samford Quartet (composed of Jeff Flaniken, Angie Flaniken, Caroline Nordlund and Samuel Nordlund) and commissioning the compositions of Joel Davis.”

Jeff Flaniken and the rest of the quartet echoed this sentiment by expressing their sincere gratitude to the Bunch family for providing the opportunity “to play music in the music capital of North America.”

Davis, composer and arranger of several of the performed pieces, added, “This opportunity really felt like the beginning rather than a culmination for the String Quartet. It was an honor to be part of this collaborative effort.”

The concert included works by Beethoven, Dvorak, and collaborative pieces featuring four spirituals arranged by Davis and sung by baritone Hopkins. The quartet also performed Antiphons, a new piece written by Davis and commissioned by the Bunch family.

After the performance, guests gathered at the legendary Tavern on the Green for a reception. One of the best aspects of the occasion was connecting with alumni in the area.

According to Davis, “It was amazing to learn about what the future holds for the Samford graduate.”

Hopkins added that the performance reflects the impressive reach and impact of the Samford community beyond the Birmingham campus.