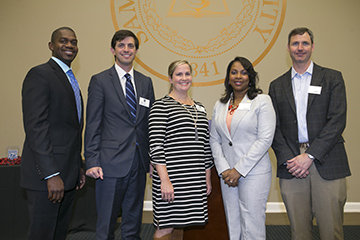 Six distinguished Samford University alumni returned to campus during homecoming 2016 to talk with students about how their Samford education helped them succeed in their chosen fields.

Stephen Dillard ’92 (Howard College of Arts and Sciences) serves as 73rd judge of the Court of Appeals of Georgia. “The things I learned at Samford I take with me as a judge,” the former history major said. “I would not be where I am today without the education I received here. Samford isn’t just about getting your education; it’s about formation.”

Jewel Littleton Williams ’05 and ’10 ( Orlean Beeson School of Education) is principal of New Hope Christian School in Birmingham and chief education officer of Learning Little People LLC. “I’m very excited to be back in OBB. It means a lot and brings back many memories,” Williams said at her presentation. “I’m looking forward to being able to do what God called me to do today, which is encourage and inspire others. My hope is that these future educators will leave with another view of the world of education through what I’m speaking on.”

Jeb Mitchell ’98 ( McWhorter School of Pharmacy) is a pharmacist and co-owner of Solutions Infusion Therapy. “Part of going home is making a person able to return to school or work and live as normal a life with as minimal intrusion as possible,” Mitchell said of his work supporting the home health care that hospitals have realized produces better quality of life for patients.

Mitchell said technology has made home health care increasingly possible, and helps him stay in touch with patients 24 hours a day, seven days a week, working with them directly to meet their unique individual needs. “Care planning is one of the most important pieces of what we do, because that’s when the patient gets more involved in the therapy rather than us just handing out the drug,” Mitchell said.

Former nutrition and dietetics major Laura Zapalowski ’00 (School of Public Health) and husband Chris bought the Homewood Gourmet from celebrated chef Franklin Biggs in 2010. Since then, the couple has provided a fine-dining café, catering and cooking classes. They are members of The Southern Foodways Alliance, Slow Food Birmingham, Slow Food Crossroads and The Birmingham Originals, and enjoy the sense of community in Birmingham’s thriving food culture. “That’s one of the things we love about owning our restaurant,” Zapalowski said. “We love being able to foster that environment.”

Kenny Jno-Finn ’04 ( School of Health Professions) is a physical therapist and clinical director of EW Motion Therapy. Speaking at Samford, he emphasized faith, consistency of practice and calling to serve. He cited the Biblical Good Samaritan as an example of a model professional, meeting someone where he was, serving his need and making sure that he was served on the rest of his journey. “A degree prepares you for an opportunity to serve,” Jno-Finn said. “In that service is an opportunity to change the world.”

Keith Brown ’04 (Brock School of Business) is president of State Traditions apparel company. He said he and business partner John McElrath didn’t know anything about the apparel business before they noticed a niche they might fill as entrepreneurs. As their idea took shape and launched in 2007, the partners had lots of catching up to do. They learned well, apparently, because their company now has approximately 400 accounts in 40 states.

Part of that success comes from the kind of networking Brock School of Business strongly encourages and supports. “It doesn’t always have to be business, business, business, business,” Brown said. “But it’s that ongoing dialogue, just to have opportunities to speak with somebody about challenges or successes and get their feedback on how to manage yourself.”