Samford Graduates Encouraged to Fulfill Their Destinies During Winter Commencement

Samford University graduates were encouraged to find and fulfill their destiny during winter commencement ceremonies Dec. 17. 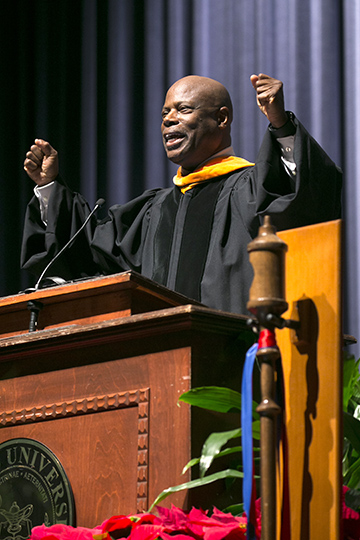 Samford University graduates were encouraged to find and fulfill their destiny during winter commencement ceremonies Dec. 17.

Destiny is “your life’s story” based on choices—right or wrong—you make, he told the graduates. “You get to choose the main characters, the plot, the storyline and, with God’s help, the ending.”

Fame and fortune are not the reasons individuals are created, Phipps added. “The reason you were created is to grow more every day to resemble, reflect and reveal the character of God and Jesus. It is now the primary purpose for which I live: Christlikeness.”

Phipps recalled meeting the late Charles Colson, founder of Prison Fellowship, on a train, as one of his greatest moments of destiny. He learned from Colson that about 60 percent of children who end up in prison have parents who have been in prison. From that encounter, he and his wife have built a ministry of tutoring and mentoring to thousands of children of incarcerated parents.

“How exciting that we get to live for the highest purpose we were created,” he said. “We can live out the destiny for which we were created, bringing our character into harmony and oneness with God.”

He asked the graduates to “encourage each other every day. Make this your life story: to resemble, reflect and reveal the character of Christ. All day. Every day. No excuses.”

Phipps, an accomplished vocalist who has been nominated for Grammy Awards, sang the 1950s ballad “I Believe” and the gospel hymn “Amazing Grace” as part his presentation, generating two standing ovations from the overflow audience of more than 2,600 in Samford’s Leslie S. Wright Fine Arts Center.

Degrees were granted to about 300 bachelor’s, master’s and doctoral graduates. Included in the class was 74-year-old M. O. Williams, who earned a master’s degree in secondary education and hopes to teach.

In his challenge to graduates, Samford President Andrew Westmoreland said, “May your future be all you dare to dream. May you be safe, challenged and inspired.”