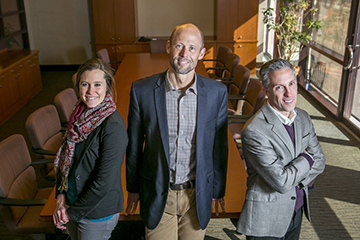 As refugees from Middle Eastern countries continue to arrive in Germany in droves, the role of the social workers who care for them is being studied by a team of Samford University social work professors.

The hope, says Samford social work department chair Kenneth M. Stoltzfus, is that the research will help shed light on the training needs of the social workers. “And that this, in turn, will lead to more effective services for refugees,” he said.

The numbers that relate to refugees are staggering, and the situations compelling.

In 2015 alone, more than one million refugees arrived in Germany. Most arrived having lost family members, most of their possessions, their position in society and their dignity. Many have experienced significant trauma that may cause ongoing mental health issues.

Stoltzfus and Samford colleagues David P. Cecil and Rachel Hagues traveled to Germany in 2016 to study the types of training the providers had received to help refugees and to identify additional training that could enhance their efforts. They interviewed dozens of social workers.

“We were all impressed by the diligent efforts of those who are working within the German social welfare system to provide services to refugees. Because the refugee crisis was so unexpected, it has overwhelmed the social service systems in Germany,” said Stoltzfus, adding that they heard accounts of individual social workers being responsible for 100 or more refugees.

“Although the social workers we met were very competent, many told us that they felt unprepared to do the work that they were now doing with refugees,” he said.  “By finding out what these front-line social workers wished they had learned prior to working with refugees, we hope to identify content that can be taught to others who want to work in this field in the future.”

Data was collected by Hagues in interviews and focus groups in April in Berlin, and by Cecil and Stoltzfus in October in the Bavarian city of Wurzburg, where they were aided by resources of the local University of Applied Sciences. They also lectured at the university, which offers a master’s degree program in international social work with refugees and migrants.

Although they are still processing data from the second trip, the researchers report that two findings stand out: a need for self-reflection and the importance of in-the-field training.

Self-reflection—knowing yourself, identifying your biases and working through them so that they don’t negatively influence work with clients—is already emphasized in social work education, and for good reason, Hagues explained.

According to those interviewed, she said, “If you are going to do this really hard, exhausting, stretching, self-sacrificing work with people that are very different than you, self-reflection is necessary both for coping purposes and to ensure you are doing the job well.”

The importance of field placement, such as internships, underscored the value placed on field practicums in the Samford program, in which first-year students do 200 hours each semester and second-year students do 250 hours.

There were other eye-openers as well.

Cecil notes that during the early waves of refugees in Germany, the social work and volunteer communities appeared to have ample political and social support. Since then, however, both forms of support have begun to erode, but the social work needs continue.

“It is both heartwarming and heartbreaking to see our German social work colleagues push ahead in their support of these individuals and families in spite of decreasing support and increasing demands,” Cecil said.

Stoltzfus said he was shocked by the number of refugees who are unaccompanied minors, as revealed by social workers who provide services to teenagers separated from their families.

“One social worker, who worked at a residential home for adolescent females, estimated that 70 to 80 percent of the females in her program had been sexually assaulted, either in their home countries or in transit to Germany,” said Stoltzfus. Many social workers, he said, expressed a need for specialized training related to serving traumatized individuals.

The trio embarked on the study, Hagues explained, because as social workers they are naturally interested in issues that impact the most vulnerable. And, as social work educators, they want their research to benefit their own students as well as the profession.

“We realized that because Germany was taking the greatest amount of refugees, their social workers would have a lot of lessons learned they could offer the rest of us,” Hagues said.

Samford students are already benefiting from their research.

Hagues incorporated it into a diversity class as a springboard to focus on the need for self-reflection. In a global community development course, she said, they discussed the challenges Germany has faced in resettling refuges and research findings about what has most helped the German social workers in working with refugees.

According to Cecil, the social work curriculum has always emphasized study of and appreciation for diversity, and it recognizes that one of the best ways to develop insight into one’s own society and culture is by studying that of others.

“In addition to the development of important research and scholarship for our discipline, this fascinating cultural experience will serve to both inspire and inform us as we guide our students into their own cultural explorations,” Cecil said. “More specifically, this work better prepares us to speak to the current refugee crises all over the world.”

The researchers all joined the Samford faculty soon after the Master of Social Work degree program was added to the College of Health Sciences’ School of Public Health in 2013. Each has prior experience in international research studying vulnerable populations: Hagues with gender discrimination issues in Tanzania; and Cecil and Stoltzfus with faith-based substance abuse rehabilitation in the Russian Federation, among other topics.

Stoltzfus believes their current research echoes the Department of Social Work and Samford mission statements that prioritize service to others as a reflection of Christian faith.

“Refugees are one group of people that are especially vulnerable and in need of service. Throughout the Bible, we hear countless stories of God being on the side of the poor, the oppressed, the stranger, the alien, the orphan and the widow,” said Stoltzfus, noting that those labels can all apply to refugees.

“We think it is an honor to be involved in any effort to improve the services provided to this vulnerable group of people,” Stoltzfus said.