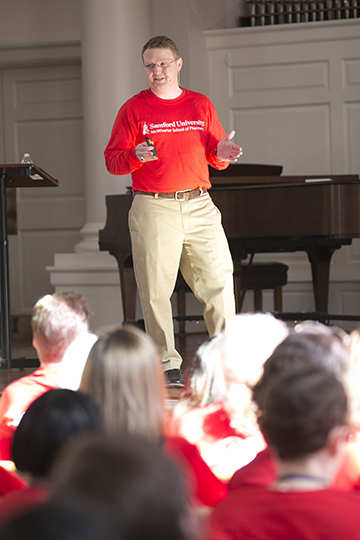 At Samford University McWhorter School of Pharmacy’s annual state of the school address, Dean Michael Crouch posed a question: How do we measure success?

With the school celebrating its 90th anniversary this year, McWhorter School of Pharmacy has an established history of excellence. Within the past year, the school was ranked the no. 2 private pharmacy school in the South and no. 53 nationally by U.S. News & World Report.

But Crouch encouraged students to look beyond the typical measures.

The vision of the McWhorter School of Pharmacy is to prepare pharmacists to transform lives. “That means your life is transformed, your patients’ lives are transformed and, ultimately, the world is transformed,” Crouch said. “That is why we are here. That is what we do.”

Over the past year, pharmacy students and employees have lived out this vision in numerous ways as they’ve traveled aboard, served on international mission trips and contributed 237,141 hours of service to the community.

With one’s eyes sets on this vision, a path naturally opens for the future, and Crouch revealed this path with the announcement of the school’s new strategic plan with the tagline, “Enrich a culture of excellence.”

“This is our playbook for the next three years,” Crouch said. “It’s built upon embracing opportunities, challenging assumptions and cultivating formed risk taking.”

The plan will have a focus on curriculum, spurring what Crouch hopes to be an “educational renaissance.” Along with this, a focus will be set on interprofessional experience and education in line with the purpose and mission of Samford’s College of Health Sciences.

In the midst of the address, Crouch paused and took a moment to reflect on the life of Dr. Gary Bumgarner, a beloved pharmacy professor who died last fall. In a video created by second-year pharmacy student Mark Gilliam, a quote from Dr. Bumgarner provided the words that ultimately summarized Crouch’s message.

“Everyone is obsessed with measuring. I believe it was St. Augustine . . . he tried to measure God and found that he was too great. You can’t measure love. Some of the most important things in life can’t be measured,” Bumgarner said.