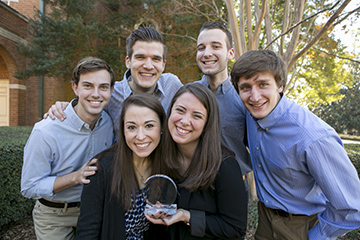 Samford University’s Intercollegiate Ethics Bowl team advanced to the quarterfinals of the national tournament for the second year in a row during competition Feb. 26. The team’s success at the Association for Practical and Professional Ethics annual meeting in Dallas, Texas, takes it to fifth place in the nation and makes it one of only three teams to earn a place in the quarterfinals back-to-back.

Hundreds of U.S. and Canadian teams compete in regional Ethics Bowl competitions each year, arguing and defending their moral assessment of some of the most troubling and complex ethical issues facing society. Student participants are judged on their ability to understand the facts of a given ethics case, articulate the ethical principles involved, present an effective argument on how the case should be resolved, and respond effectively to challenges from opposing team and expert judges.

University Fellows director Bryan Johnson  serves as a team coach along with communication studies professor Mike Janas and philosophy professor Wilton Bunch. Johnson said the competition is important to Samford because it helps elevate the university’s academic reputation. “We’ve developed a reputation as one of the best teams in the country,” Johnson said. He also noted that other universities are looking to Samford for expertise in training Ethics Bowl competitors, thanks in large measure to the work of nationally celebrated debate coach Janas.

Johnson said the freshman members won a practice competition in Dallas, which promises a good start next year, even after the team loses its senior members and will be mostly new.