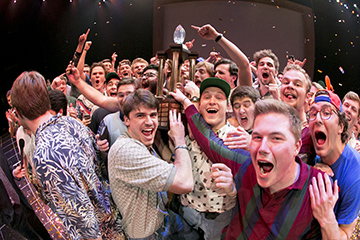 With the theme “The Greatest Job on Earth,” the group told the story of dads who must balance the chaos of home life while moms are away.

Show codirector Will Robertson, a senior history major from Brentwood, Tennessee, said the theme of the show was “relatable,” which made it easy for the group. “We had a great group of guys who bought into the theme and really were able to sell it,” he added.

In addition to Sweepstakes, Pi Kappa Phi won the judges award for creativity, and the participants’ choice award for music and most entertaining show. Pi Kappa Phi previously won Sweepstakes in 2014, 2013 and 2009.

Alpha Tau Omega fraternity took first runner-up honors in only its third year to participate in Step Sing. Its show, “Mine for the Taking,” was about coal miners searching for “another epic adventure.” The group also won judges awards for choreography and music, and the participants’ choice award for choreography.

Freshman Ladies won the Step Sing Character Award, presented to the group that demonstrates a spirit of congeniality and character in its actions on the stage and behind the scenes. The award was first presented in 2016.

Alpha Omicron Pi continued a decades-long tradition as the participating group that raised the most money for the Step Sing philanthropy. This year, all participating groups helped to raised $14,100—a Step Sing record—for Shauna’s House, one of five transition homes for Ukrainian orphanage graduates through Lifesong for Orphans.

The house is named for the late Shauna Yelton, who served for several years as director of Samford’s health services before her untimely death in 2015. Her husband, Todd, is head coach of the Samford women’s soccer team. He and his two children were at the presentation during the Saturday evening performance.

“Thank you from the bottom of our hearts,” he said. “We never imagined the love and support we would receive from this community. It is incredibly humbling.”

“This was one of the most rewarding experiences of my Samford life,” Roberts said. “It was cool to end my senior year with that.”

Gassner added, “Step Sing embodies so much of what Samford represents. It is the community coming together for a common goal.”

More than 1,100 students in 17 groups performed four shows in the 67th production of Step Sing, which came during the university’s 175th anniversary year. The show is totally student-produced and professionally judged. It is considered one of Samford’s most cherished traditions.

In addition to four live performances on campus that attracted about 8,000, there were more than 17,000 connections in 23 countries connected to live streams of the three evening shows.  The office of alumni programs provided Watch Party materials to 97 groups in 22 states and the District of Columbia. A special watch party that ended at 4 a.m. local time was held by the 24 students at Daniel House, Samford's London Study Centre.

Step Sing originated on the steps of Renfroe Hall on Samford’s East Lake campus before the university relocated to its present location in the late 1950s. It was held in the gymnasium of Seibert Hall and other locations around the Homewood campus before finally landing in Wright Center in 1976. This was the 46th anniversary for the Sweepstakes Award.