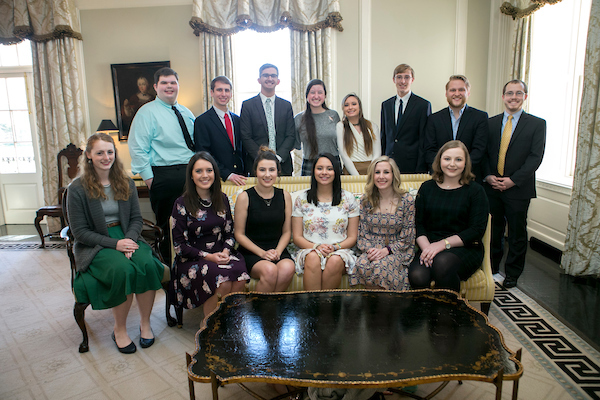 This year’s competition marks the 60th year of the Colonial Dames’ partnership with Samford University, a relationship that has provided awards to outstanding students through the American Independence Awards Program. The members have contributed to Samford each year so that outstanding students who have exhibited knowledge of, and appreciation for, American heritage could be rewarded through scholarships.

Keely Smith, a junior history, Spanish and global studies major from Alpharetta, Georgia, won the first place prize with a paper on “The Power of Faith in Florida: The Effects of Catholicism on Diplomacy under Pedro Menendez.”

Samford President Andy Westmoreland, who attended the program, applauded Smith for her work in his weekly Monday Mission email to the Samford community. “Without referring to her notes, she gave a concise, elegant description of the elements of her paper,” Dr. Westmoreland wrote. “I suspect that she could have talked for two hours, given the extent of her research. The world is better because Samford students are nurtured in their development of intellect.”

Trevor Waldrop, a senior history and classics major from Birmingham, won third place with a paper on “The Holy War of King Phillip.”

Joann Hughes, a senior public relations major from Savannah, Georgia, won fourth place with a paper on “The Road to Revolution and the Disciplined Violence which Ensured It.”

Madeline Perkins, a junior creative writing and public administration major from Tulsa Oklahoma, tied for fifth place with Margaret Schultz, a junior history major from Austin, Texas. Perkins’ paper was on “Women in the Sequel: Female Authorship in Colonial America.” Schultz’ paper was on “Smallpox and Puritans: The Inoculation Debate for Authority in Boston’s Covenant Society.”

Chase Friday, a senior history major from Warrior, Alabama, was awarded sixth place for a paper on “Mary Rowlandson’s Conflicted Thoughts about Her Captors.”

David Beutel, a junior history, Spanish and global studies major from Calhoun, Georgia, took seventh place for his paper on ”Ebenezer’s ‘Good Conscience’: The Inevitability of Slavery in Colonial Georgia’s Most ‘Moral’ Community.”

Meri Cashion, a sophomore history major from Helena, Alabama, placed ninth for her paper on “Dr. Benjamin Rush and the Yellow Fever Epidemic in Philadelphia, 1793.”

Sean Coffindaffer, a junior history major from Guntersville, Alabama, was awarded 10th place for his paper on “Bacon’s Rebels: The First American Revolutionaries.”

Amber Hammond, a senior history major from Lilburn, Georgia, was awarded eleventh place for her paper on “A Woman’s Perspective on Revolutionary War and Politics.”