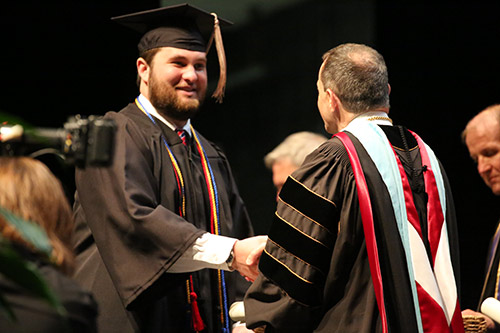 Laura Kelly told the 184 graduates of Samford University’s Brock School of Business that they are the CEOs of their future and can unlock the untapped potential in their lives. She also stressed to the graduates that “success is not a destination; it’s a never-ending journey.”

Kelly, a 1978 Samford business graduate, was speaker for the May 12 commencement ceremony, one of seven being held at Samford this spring. Kelly is a managing director for CoreLogic Inc., Westlake, Texas.

Kelly offered graduates three keys that they could use to unlock a successful future. The first key is for them to “own their future and to define what success means to them.” She added, “Just like your DNA, it [success] will be unique to you.” Kelly also told graduates that there will be accidents and detours in their lives, but if they know where they are going and their destination, they will be put on the most direct route.

Her second key to success is “always wear your best cowboy boots.” She stated that leadership is profound in that people will pay attention to what you say as a leader. In addition, she told the students that they must protect their brand.

“Brand damage is real on a corporate level, and it is real on a personal level,” Kelly said. “It’s long-term damage that is very difficult to fix. Everything you do, every day you do it, either builds or erodes your personal brand. And, in today’s world, your social brand has been fused with your personal brand, so it’s equally if not more important to manage your social brand.”

Kelly reiterated to the graduates that they cannot live someone else’s brand. They have to live their own.

In her third key, she told the students to find their passion and to “find their bluebird.” According to Kelly, bluebirds are symbols of happiness, prosperity and new birth.

She reflected on her own story of when she left MasterCard to join American Express. She did it because she wanted to provide affordable banking to 25 percent of citizens who were not well served by the current financial system. She met with Walmart on a project that would help its constituents, many of whom had an income of only $40,000. She created project “Bluebird” for them. This project made her team at American Express relentless in making a difference with those who are underserved. She says that her team found its bluebird. Kelly added, “Once you align your passion and your work, you’ll find magic happens.”

Kelly closed her remarks about how to face adversity with the story of the Garden of Gethsemane. She told students that it was a bad day for Jesus, and he knew he was in his final days. Jesus had been betrayed, but he continued to demonstrate courage and forgiveness, and, even in this bad time, nothing would take him off course. The lesson is that students must have courage and grace, but also have faith in power.

“Jesus gave us the power to put his armor on, and that armor can strengthen us every day,” she said.

Kelly ended by telling students to “be bold, be brilliant, be unstoppable and enjoy being the CEO of your future.”

After students were awarded their degrees, Samford President Andrew Westmoreland presented a posthumous degree in finance to Brock School of Business faculty member Darin White for his son Avery, who died unexpectedly Jan. 30.

Corey Storrs White, a marketing major from Vestavia Hills, Alabama, and brother of Avery White, was awarded the university’s John C. Pittman Spirit Award, which recognizes a graduating senior who has exhibited a serious commitment to being a student and achieving academically, to honoring Christ, to personal health and involvement in student life.