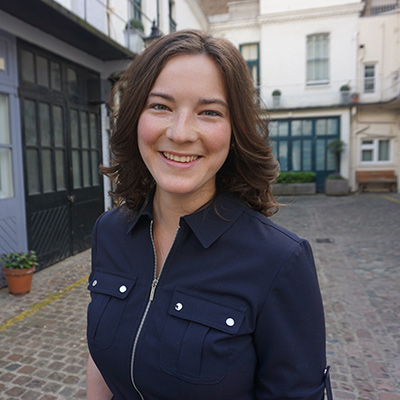 When Samford University Brock Scholar Autumn Adams went to London for the spring semester of her sophomore year in 2015, she had no idea she would return to Daniel House two more times as a Samford student. And, she never dreamed that she might have the opportunity to move there full-time after graduation because of her work in London.

“I knew London would be an experience I would treasure for a lifetime, but I expected things to return to normal when it was over,” said Adams. “When I came home and had four semesters left, I was no longer satisfied with playing it safe.”

Adams formed a partnership with a London-based tech company that allowed her to do a one-month independent study over Jan Term her junior year. It turned into a semester-long research project and then became the basis for her yearlong senior thesis with the purpose of helping the company define a long-term marketing strategy.

“Even when that was all decided, I still had no idea the collaboration would put me back in London for my final semester,” said Adams. “But now that I have worked full-time in this city for a few months, what once seemed impossible suddenly is possible. It is amazing what can happen over time if you wake up every day and focus on chasing that day’s opportunities.”

The Brock Scholars program has enabled Adams to chase opportunities like this, which allows her to also simultaneously network career opportunities while she is fulfilling her academic requirements.

“As a Brock Scholar, I have learned that growth is progressive, and it requires a lot of faith,” said Adams. “To make the most of this program, I have had to consistently embrace challenges that seem daunting. I also know there is value in facing these challenges, and having that knowledge and discomfort, I also know that it brings growth.”

The simplest of tasks, such as commuting to work and making tea, are challenges that Adams must overcome daily because they are done differently in London.

“It is really easy to get discouraged when nothing comes naturally and you feel like an outsider,” said Adams. “Then again, I can now appreciate knowing what that feels like and can better sympathize with others in the future who may be in a similar situation.”

Although challenging at times, the experience has given Adams the opportunity to move to London after graduation as a full-time employee of the tech company she is working with to implement the marketing strategy she has developed. She received her Bachelor of Science degree in business administration May 12.

“Studying abroad is costly, as it requires you to forego relationships and opportunities that you love back home for something entirely unknown. It has the most potential to change your perspective, grow your character and confidence and give you memories that will last a lifetime,” said Adams. “I am having to actively remind myself of these things since I might, once again, have to decide between home and abroad, the comfortable and the uncomfortable.”