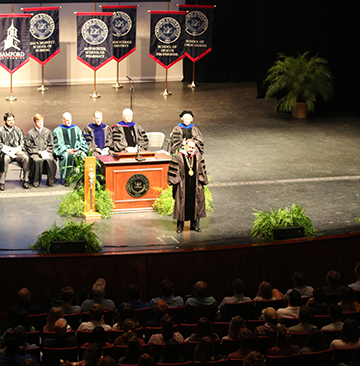 There is much to learn about leadership—right and wrong—from the life of Moses, according to Samford University President Andrew Westmoreland.

The first lesson is that wise decisions require time. Relating a story found in Exodus, Westmoreland noted that Moses made a snap decision to kill a man and then hide the body. He immediately knew that what he had done was wrong.

Quoting author Frank Partnoy from the book, Wait:  The Art and Science of Delay, Westmoreland said, “In most decisions, we should take more time than we do. Delay your decision until the last possible moment. Even milliseconds can matter sometimes.”

A second lesson is that true leadership requires moral authority. The following day, Moses was attempting to resolve an argument between two others who called him out for his action the previous day. As a result, Westmoreland explained, Moses had sacrificed his moral authority and was incapable of being an effective leader.

To illustrate the lesson, Westmoreland told students and faculty about Samford alumnus Jeremy Towns, now a medical student at the University of South Alabama. While at Samford, Towns started a student ministry called RANSOM that has spread to other campuses and has touched thousands of lives.

“Jeremy represents the singular impact of one person,” Westmoreland added. “There are a lot of characteristics we could talk about with Jeremy, but the consistency of his Christian walk has made the most difference.”

The third and final lesson Westmoreland shared is that right relationships require transparency and faithfulness over a sustained period of time.

Moses realized that he had done wrong and, as recorded in scripture, says “what I did must become knowledge.”

Westmoreland told of attending the memorial service the previous day for a friend who was married for 58 years, worked for the same company for 40 years and attended the same church for 63 years. He cared for everything, including taking care of his wife and her health challenges the last 10 years of her life.

“When he died, there were no surprises,” Westmoreland said. “His life had been so consistent that he came to the end, and there it was—a life lived the way it ought to be lived.”