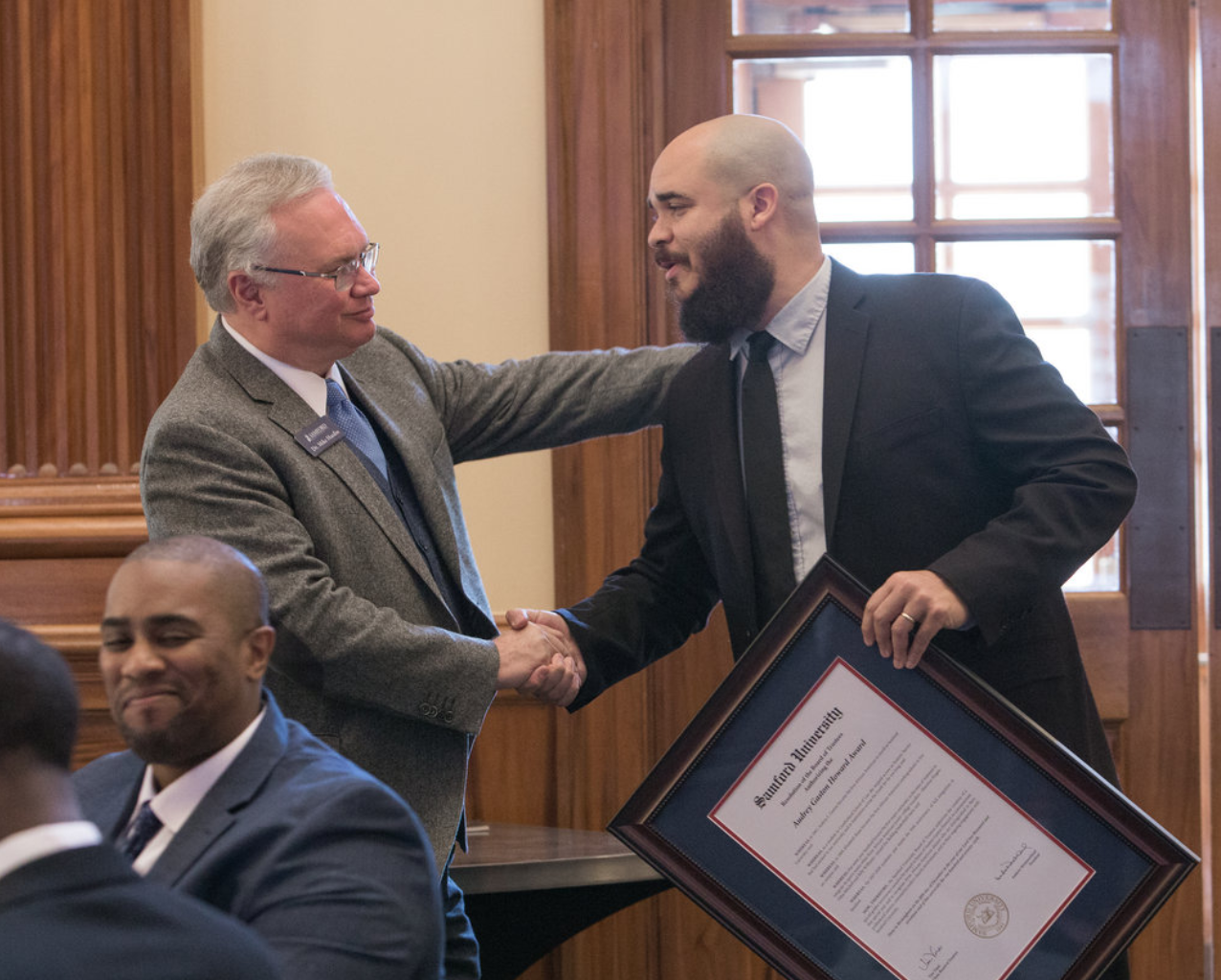 Appreciation for Samford University as a loving and diverse community was expressed several times by alumni and guests at a Jan. 23 luncheon commemorating the 50th anniversary of the university’s integration. The luncheon followed the opening convocation of the spring semester that featured Charles L. Howard, the son of Samford’s first African-American student, Audrey Lattimore Gaston Howard.

Mrs. Howard, who died in 1989, also was mentioned several times as a pioneer for others who followed her. She was Audrey Gaston while a student in Samford’s Cumberland School of Law, where she received her degree in 1970.

Denzell Moton, a second-year law student from Aiken, South Carolina, said that he and other law students are benefitting from “the sacrifices that Mrs. [Howard] made.”

“I’ve been able to be mentored and tutored not just as a law student but as a person with morals,” he added, “because of the strides made by the giants who came before me.”

Angel Sims, a junior psychology major from Chattanooga, Tennessee, said that Mrs. [Howard] “paved the way for all students of color” at Samford.

“I thank God every day that I can say, ‘I am at Samford University’,” Sims said.

“I did not know how to appreciate my degree until I graduated, and someone told me how valuable it was,” Isaac Cooper said. A 2012 graduate, he serves as president of the Samford Black Alumni Association.

“Because of the encouragement of the university, we have been able to develop a network to serve alumni, current students and prospective students,” he added. “All of that is because of the courageousness of Mrs. [Howard].”

Samford Provost J. Michael Hardin presented Charles Howard with a framed resolution from the university’s board of trustees honoring his mother and announcing the new Audrey Gaston Howard Award to recognize the university’s African American alumni. Samford will recognize the first 29 recipients of the award each day in February during 2018 Black History Month observance. Several of the recipients were present for the luncheon.

“I am undone by your generosity and the love of this institution,” Howard said. “The work you are doing would make my mother proud. And Cumberland, you took a risk because of the courage you displayed 50 years ago. She was proud to be an alumnus of this institution.”

One of the more poignant moments came from Howard’s wife, Lia, who teaches political science at the University of Pennsylvania.

“I never got to meet my mother-in-law, but I feel like I know a new part of her story because of you,” she told the gathered audience. “I am grateful for the legacy that she left for our family that also has allowed my husband to get to know his mother in a new way.”