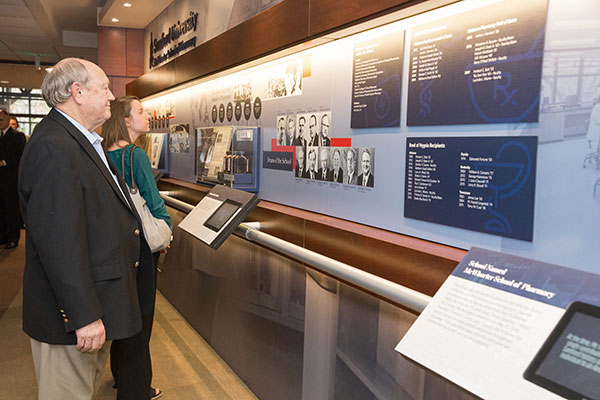 Samford University’s McWhorter School of Pharmacy concluded a year-long celebration of its 90th anniversary Feb. 15 with the dedication of the Pharmacy History Wall with alumni, faculty and friends in attendance.

In addition to the various pictures and descriptions, the Pharmacy History Wall incorporates physical historic items, including a leather bound book of the school’s first curriculum from 1927.

The wall also includes various touchscreens that allow visitors to look back at old yearbooks, class composites and historical photos—as well as photos from the school’s 90 for 90 campaign, where Crouch visited 90 alumni-owned or operated pharmacies in celebration of the school’s 90th anniversary.

Through a designated plaque and video, the Pharmacy History Wall also honors the late Clayton McWhorter, for whom the school is named. “We would not be where we are today if it was not for the generosity and the transformational gift that was given by Mr. McWhorter,” Crouch said.