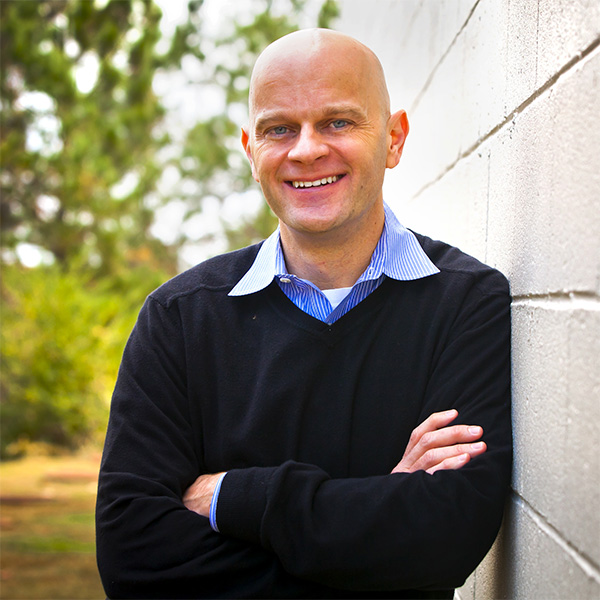 Theologian Brent Strawn brought to Samford a challenging message for the 2018 Ray Frank Robbins Lecture March 22. Strawn is professor of Old Testament and director of the Doctor of Ministry Program at Emory University’s Candler School of Theology. He also is a noted author whose most recent book, The Old Testament is Dying: A Diagnosis and Recommended Treatment, provided the theme of his lecture at Samford.

“For many contemporary Christians, the Old Testament has ceased to function in healthy ways in their lives as authoritative, canonical literature,” Strawn told his audience in a packed Brock Forum. Further, Strawn said, “I firmly believe that if the Old Testament dies, the New Testament is not far behind.” He cited, among other symptoms of decline, the Pew Research Center’s U.S. Religious Knowledge Survey of 2010, which revealed that atheists and agnostics were better informed than Christians about basic facts of Christian scripture.

Strawn’s own survey of great sermons of the 20th century suggested at least one cause of this embarrassing performance. Although the Old Testament is 78 percent of the Bible, he said, only 21 percent of the surveyed sermons took the Old Testament as their text. In fact, sermons with no Biblical text outnumbered those using the Old Testament. Strawn also found that 21 of the 39 books of the Old Testament were not represented at all, or were underrepresented. The “dismal result” of his survey suggests that the sermons, scripture readings, hymnody and songs of Christian worship simply do not expose Christians to three-fourths of the core texts of their faith.

It is no wonder, then, that Strawn views the Old Testament as a something like a dying language, and finds insights in linguistics, specifically in the development of pidgin and creole languages.

Strawn explained that pidgins are very limited languages of convenience, arising from the meeting of two parent languages, as in trade and colonization. These are “massive reductions” of the parent languages, and have greater contribution from the language of the more powerful culture. Pidgins are inadequate for longer-term use or for expressing complex ideas.

Creole languages, arising from pidgins, are more complete, complex and irregular, but still are significantly removed from the parent languages.

Strawn said the process of pidginization and creolization helps explain why people know surprisingly little about the Old Testament and “mispronounce” what little they do know, reducing it to platitudes at one extreme and unrelieved nastiness at another. In the latter case, Strawn said “New Atheist” Richard Dawkins critiques the Old Testament in a powerful but ultimately “silly” way because he doesn’t speak the full language of scripture. “He knows only a pidgin, and therefore he critiques a pidgin,” Strawn said. “If you know the whole language of scripture, it couldn’t be easier to see him for what he is—a baby-babbler, thrashing around in the deep ocean of the Bible’s complexity, a novice, an amateur, a hack.”

Strawn didn’t let professed Christians off his linguistic hook. He said the prosperity gospel as represented by Joel Osteen is a creole at best–a consumerist, grown-up pidgin that reduces the Bible to a health/wealth/prosperity formula, “as if all the Bible wanted was for everyone to be upwardly-mobile, upper middle class individuals per North American standards, all of whom end up consuming far more of the world’s resources than anyone should.” Without scriptural fluency, Strawn said, “we’re bowled over by the economic success of Osteen and company, bamboozled into thinking that life is all about our personal well being.”

Strawn said the language of the prosperity gospel –what he called “the New Plastic Gospel of the Happiologists”–promises that God will respond in a predictable way to a particular request. That approach, Strawn said, “makes the God of scripture no longer the God of the universe, but something more like a cocker spaniel that comes at every beck and call that we make.”

“This is pure, unadulterated capitalism,” Strawn said of the Osteen brand of books and guides and board games. “What it is not, in my judgment, is pure, unadulterated gospel.” He observed that the prosperity gospel, which emphasizes avoidance of negative thoughts and words, is especially off the mark on the subject of suffering.

The Bible offers many examples of devout believers who suffer while the wicked thrive, Strawn said. In the New Testament book of Matthew, when Peter implores Jesus not to speak of his coming fate, Jesus says, “Get behind me, Satan, for you are a stone that could make me stumble, for you are not thinking God’s thoughts, but human thoughts.”

“God’s thoughts, according to Jesus, sometimes include suffering and death, but not according to Happiolgy,” Strawn said. “Happiology is all shine and no sweat, a theology of glory without a theology of the cross, all Easter Sunday without Good Friday and the Garden of Gethsemane. And so, I think, the new plastic gospels are, in the end, not the gospel of God.”

As with many languages that arise in the context of colonialism, slavery and other forms of social injustice, it seems that “the language of scripture, now seriously reduced and altogether subsumed in the prosperity gospel creole, has been enslaved to a more dominant master–the master of individualistic, narcissistic, consumeristic, zero-sum economics,” Strawn said. “If that’s correct, what the prosperity gospel offers us is no good news at all, but another form of slavery.” Turning back to his medical analogy, Strawn offered a potent prescription for liberation. “We need more scripture in our Christian lives, and, specifically, more Old Testament.”

“To live effectively as a Christian means, in no small part, to have intimate familiarity with Christianity’s sacred text, our sacred script, so we know what to do, what to say, how to live and how to die when our time on stage comes,” Strawn said. That is not a matter of gimmicks or trivia, but of hard-earned fluency and livability.

Strawn acknowledged that interpretation and the daily application of scripture courts controversy. Speaking only two days before the national March For Our Lives events, Strawn applied his own scriptural fluency to the problem of gun violence. “It seems to me that those steeped in scripture will think very differently about their personal safety, and especially about protecting that, and their property, with deadly force,” he said. Citing the Biblical books of Isaiah and Micah, he said “we see in the prophets that God’s ultimate desire is that no one learn war anymore, and that all extended magazines, assault rifles, semiautomatic firearms, and every gun of every sort gets turned in and melted down to make more shovels, rakes, tractors, harvesters and hay bailers.” In view of scripture, including “the words of the Prince of Peace,” Strawn said, “how could any Christian worthy of that name love their guns more than their God?

“I’m beginning to think that, in our present context and climate, Christians must lay down all arms, even the right to bear them, because our hands are too full carrying what Christ has called us to take up—the cross,” Strawn said. “We don’t need to own weapons designed to kill when we are on our way to our own crucifixions.”

Strawn also addressed racism, noting that white racists “often mix their separatist politics with Christian faith.” “How is that even imaginable?” Strawn asked. “Only through the crudest and strangest of pidginization processes, because the full grammar of scripture could not be clearer that God’s grand vision includes every people, that the blood of the lamb ransoms saints from every tribe and language and people and nation, and that even people who once were considered enemies can, and do, become part of God’s family.”

When white racists complain of being “outnumbered,” Strawn said, “those of us who know the grammar of scripture know exactly what we are hearing—the irrational and tyrannical fear of Pharaoh, expressed in the opening chapters of Exodus.” It is the complaint, he said, of the genocidal “arch-enemy of God” and the prelude to mass immigration. That observation naturally led Strawn to his lecture’s final stroll through the cultural mine field.

“Christians who know the full grammar of scripture know that the Bible is crystal clear on how immigrants and foreigners are to be welcomed and cared for, provided for, given food, shelter and all the rest,” Strawn said. He noted that Ruth was a foreigner, widower and refugee from famine. She also was the great-grandmother of King David. “No Ruth, no David, no Jesus.” Strawn said. “At the end of the day, when the King separates the sheep from the goats, what matters, ultimately, is if one welcomes the stranger, who turns out to be the King himself in disguise,” Strawn said of Jesus’ own words on the subject.

“If we knew scripture’s vocabulary, we’d be better off and so would the immigrants who live among us, because we’d know so much more than just fear,” Strawn said. “If we were fluent in scripture, we might even remember the haunting words of Ezekiel 13, where God speaks against people who claim that everything is just fine when it isn’t, and who build walls to trust in. God says such walls will be torn down definitively.

“I’m quite certain that the whole thing is very, very complicated,” Strawn said. “I’m equally certain that it is our job to get into it, to get to work on the hard questions of interpretation, implementation and, more fundamentally, to get to work on fluency so we can actually have these conversations.” He said it will be very difficult, painstaking and frustrating work, starting simply with words and working up to phrases, sentences, books and possibly even poetry. “And who knows,” he said, “but that one day we might even dream in the language of scripture.”