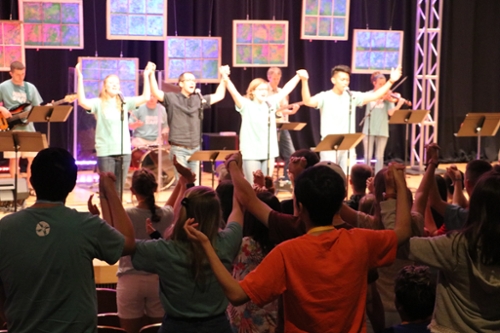 Samford University’s Center for Worship and the Arts celebrated the 5th anniversary of Animate June 25-29. The five-day summer program provides training in worship, theology and the arts for teenagers and their adult mentors.

This year’s 137 attendees are from Texas, Alabama, Virginia, California, North Carolina, Mississippi, Florida and Georgia, and include members from 18 congregations and staff from both Samford and other universities.

Animate was established as a hands-on, ecumenical, intergenerational workshop in worship and the arts that retained deep roots in Samford University’s Christian tradition.  According to Executive Director Eric Mathis, “Animate is designed for teenagers, youth ministers, worship ministers, parents and others who are willing to help teenagers use their gifts for the glory of God inside and outside the church.”

The Center for Worship and the Arts was established in 2012 in Samford’s School of the Arts with a grant from the  C.I.O.S. Foundation to provide resources for young people and communities of faith to enhance their worship practices. Since that time, the center has grown and received more than $2.4 million dollars allowing for new initiatives.

Mathis notes, “The center and Animate have found their stride. In five years, we have created a national platform for conversations about the relationship between youth ministry and worship ministry.”