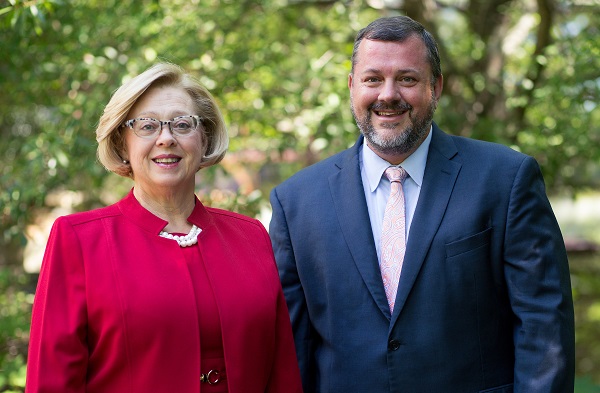 Nena F. Sanders, vice provost of Samford University’s College of Health Sciences and Ralph W. Beeson Dean and professor of Ida Moffett School of Nursing, and Michael Hogue, professor and associate dean of the Center for Faith and Health, have been named to the Alabama Healthcare Hall of Fame. Sanders and Hogue were honored at the induction ceremony on July 21 in Montgomery, Alabama.

The Alabama Healthcare Hall of Fame recognizes individuals who have made outstanding contributions to and rendered exemplary service for health care in the state. Sanders and Hogue join a distinguished group of health care leaders who share this great honor, including several Samford alumni and retired faculty.

“We are proud of the illustrious careers of both Dr. Sanders and Dr. Hogue. Our students benefit from their extensive experience and leadership in their respective fields. Their work exemplifies Samford’s core values and we celebrate this accomplishment with them,” said Michael Hardin, Samford provost and vice president for academic affairs.

As a transformational leader in nursing practice, education, administration and entrepreneurship, Sanders has committed her career to improving the delivery of health care by reengineering health care delivery systems and improving patient outcomes through interprofessional education and collaborative practice. Prior to being named nursing school dean in 2001, Sanders was transforming nursing practice roles. Her early work with Humana, Inc. resulted in the implementation of a progressive nursing practice model adopted nationwide by more than 200 hospitals. This groundbreaking model expanded the role of the advanced practice nurse and its hallmark was an interdisciplinary approach for patient care delivery.

In 2013, Sanders was named vice provost of Samford’s College of Health Sciences. In this role, she united the university’s four health-related schools—health professions, nursing, pharmacy and public health—under the model of interprofessional education and practice. This approach is redefining health care education and equipping graduates with the skills and knowledge to succeed in today’s rapidly changing health care environment.

“It is an honor to be considered among such esteemed colleagues within the state,” Sanders said. “Not just for me, but also for the wonderful people at Samford University with whom I work with to further strengthen Samford’s leadership in health care education and practice.”

Much of Hogue’s work centers around advancing the role of pharmacists as collaborative members in a team-based, patient-centered model of care. He has long been an advocate for expanding pharmacists’ public health role, specifically in the area of immunization. Hogue was a member of the team that developed education, advocacy and practice tools that led to 50 states, Puerto Rico and the District of Columbia authorizing pharmacists to administer vaccines. These efforts have resulted in hundreds of thousands of pharmacists across the nation and in several other countries providing life-saving immunizations in their communities.

Hogue joined the faculty of Samford’s McWhorter School of Pharmacy in 1999. He was named interim dean of the school in 2014, and in 2016, Hogue was named the associate dean for the Center for Faith and Health. In this role, he works to unite the college and its four schools under a missional purpose to the community and world through interprofessional partnerships, involvement and service-oriented research. His vision and leadership were recently nationally recognized as he was elected to serve as president-elect of the American Pharmacists Association next year.

“Being named to the Alabama Healthcare Hall of Fame was a humbling surprise and honor,” said Hogue. “Pharmacists have a vital role to play in health care through disease prevention, and I’m proud to be a part of McWhorter School of Pharmacy and the College of Health Sciences, where we teach our students every day to make a lasting impact on the communities they serve.”

Along with Sanders and Hogue, McWhorter School of Pharmacy alumnus Donnie Calhoun, ’87, was also inducted in the Alabama Healthcare Hall of Fame this year. Calhoun is the owner of Calhoun Pharmacy, a nationally accredited pharmacy for sterile and non-sterile compounding, in Anniston, Alabama. Throughout his career, Calhoun has served in numerous leadership roles within pharmacy organizations at the state and national level. In 2011, he was appointed president of the Alabama State Board of Pharmacy committee.