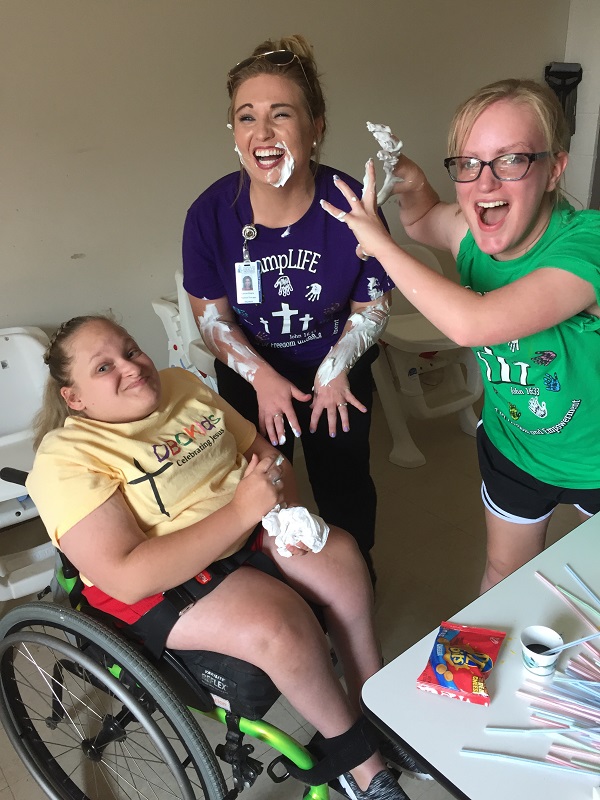 Lauren Evans remembers the first meeting she had about her capstone project. She was a first-year student in Samford University’s Doctor of Physical Therapy program, and a member of the program’s inaugural class. Scott Bickel, an associate professor in Samford’s School of Health Professions, explained to her in that meeting that her capstone project could be based upon one of three pillars: research, professional leadership or service.

“I got chills when he said service,” Evans said. “I was like, Lord, are you telling me the time is now?” For in that moment, Evans knew exactly what her capstone project would be.

Born and raised in Fyffe, a small town in north Alabama, Evans first came to Samford for her undergraduate degree. Not long after she declared her major as exercise science, a professor encouraged her to participate in CampUs, a respite camp for families and children with special health care needs that is directed by Jill Cunningham, a professor in Samford’s Ida Moffett School of Nursing.

Evans first volunteered with CampUs as a sophomore, and the experience set her future into motion.

“I told Dr. Cunningham that I wanted to do [a camp] like this in my hometown one day . . . because in rural Alabama, there are few opportunities for children with special needs,” she said. “But never did I think that it would be something I’d do while I was still at Samford.”

Three years later, Evans would be sitting in Bickel’s office with a divine opportunity. In hearing that her capstone could be a service-based project, she began to explain the plan that has been on her heart since her first week at CampUs—to create a similar respite camp for families and children in her hometown and her husband’s hometown of Decatur, Alabama. She would call it Camp Life.

“I’ve known what I’ve wanted to do for a long time. I just didn’t know it would happen now,” she said.

Partnering with Peyton Fredricksen, a fellow Doctor of Physical Therapy student, they set to work, organizing two one-day camps in June and July 2017.

Eighteen campers and their siblings attended the first Camp Life event in June. Evans was committed to making this a camp for the community, run by the community. She recruited volunteers in the area, including nursing students from the local community college, and she invited the local firefighters and police officers to stop by for a visit.

The first camp was a huge success, which gave her confidence going into the July camp in Decatur, Alabama. “When I look back, I don’t know how we did it all with school,” Evans said. “But obviously, it had become much bigger than my capstone project.”

“Lauren is a special individual who exemplifies the core values of Samford University. It was a privilege to see her pursue a dream through her capstone project and witness the Lord’s work in her life and the lives of all who were involved in Camp Life,” Bickel said.

In May, Evans walked across Samford’s commencement stage, receiving her Doctor of Physical Therapy. But even with a degree, Evans hopes nothing will change. “To say I’m now Dr. Evans . . . it’s important because I want people to know that I know what I’m doing, but at the end of the day, I’m just Ms. Lauren to these kids,” she said.

Evans will host another Camp Life event in Fyffe, Alabama, this June while she prepares for her board exams this summer. While she plans to pursue a career as a pediatric physical therapist, she hopes Camp Life will continue to grow as large as the Lord intends.

“When I look back, God really had this all figured out from the get go,” she said. “It gives me chills when I think about it.”