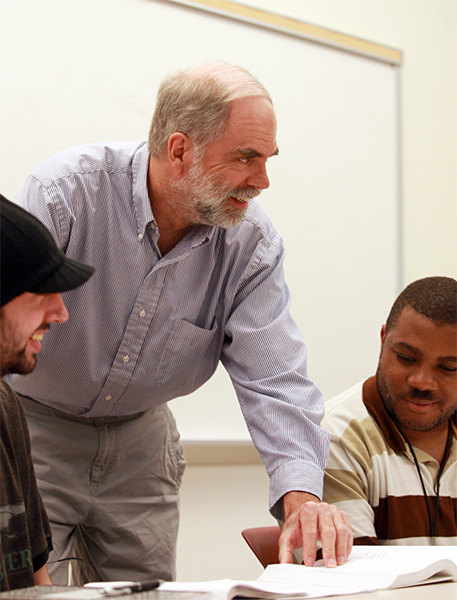 Samford University Math and Computer Science professor Steve Donaldson died at his home Sept. 2. He is remembered by the Samford community as a beloved teacher, scholar, avid outdoorsman, colleague and mentor. “He was completely, utterly engaged in a fusion of the life of the mind and the life of the spirit,” said Samford president Andrew Westmoreland.

Donaldson, a cognitive scientist, served as director of Samford’s computer science program and co-director of the computational biology program. He is well known and respected in the field of science and religion, his scholarly passion and research focus of recent years. His published work on that topic includes Dimensions of Faith: Understanding Faith Through the Lens of Science and Religion (author,) A Little Book for New Scientists: Why and How to Study Science (co-author with Josh Reeves) and Christian Perspectives on Transhumanism and the Church: Chips in the Brain, Immortality, and the World of Tomorrow (co-editor with Ron Cole-Turner).

The Scholarship & Christianity In Oxford (SCIO) organization rewarded Donaldson’s interdisciplinary curiosity and scholarship by inviting him to take part in the prestigious Bridging the Two Cultures of Science and the Humanities project in Oxford, England.

Donaldson was a longtime member of the university’s Science and Christianity Cadre and, in 2009, one of the founders of Samford’s Center for Science and Religion. Through his work with the center, he often found himself bridging, and making peace between, notoriously hostile cultures. He saw no need for people of faith to reject science and no need for scientists to dismiss faith. He hoped the groups could inform and enlighten each other to address looming challenges to humanity–especially related to artificial intelligence and transhumanism. “I want people to feel like they can talk about these things without feeling like somebody is hammering them,” he said.

Donaldson’s work, presented not only in books and professional journals, but also in Sunday school classes and public lectures, sometimes addressed the most controversial aspects of science and religion, but with mutual respect as the foundation for learning and growth. He helped those dismissive of belief see the deep well of ethical thought at the heart of faith, which can inform and shape new technologies. He helped those dismissive of science see the good it does, and see how it can be an expression of faith. "This is a significant attempt to find creative ways to make the mind a full partner with the heart, soul, and strength with respect to loving and serving God," Donaldson said of the Center for Science and Religion.

The Donaldson family requests that donations in memory of Steve be made to Samford’s Center for Science and Religion online or via check to University Advancement.