Published on October 2, 2018 by Natascha Anderson   Share this on: 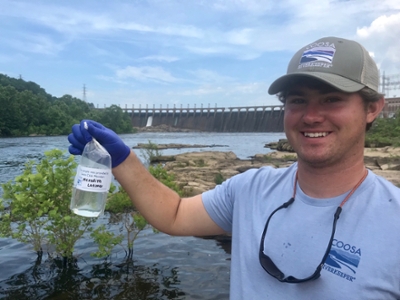 “In public health, we study the overall health of the general public, and how we can make it better,” said James Frost, a senior public health major in Samford University’s School of Public Health. “There is so much that goes into it. Public health affects all of us in more ways than we realize, down to the food that we eat and the water that we drink.”

Frost spent the summer interning with the Coosa Riverkeeper, a citizen-based river conservation group that works to protect, restore and promote the Coosa River in Alabama. Through this experience, he learned first-hand why water quality is considered a major topic in public health.

Throughout the summer, Frost worked with the organization’s swim guide program, testing samples from the Coosa River to ensure the water was safe for both public visitors and private residents to swim in. Frost spent about five hours on the river each day and on average 197 miles on the road in order to test 10 different water sites for measurements like turbidity, PH and oxygen levels.

After collecting and logging each sample, he would transport them in a cooler from site to site, remaining aware of his limited six-hour time window and risks of sample contamination.

“The river is a really big place that brings the public together,” Frost said. “Keeping people safe from E. coli and other diseases that can contaminate the river was our top priority.”

This work required Frost to be active and on the go, which he said was one of his favorite parts of the job. “I loved coming back to work every day,” he said. “It wasn’t like a regular job where everyone was just trying to get their work done and go home. Everybody wanted to be there, and we all had fun, sharing our stories and becoming a community.”

Frost said his greatest takeaway from the internship was the experience he gained. By working with other students and professionals from around the state, Frost was able to practice teamwork while at the same time putting into practice the knowledge and skills he has gained in the classroom.
Samford is a leading Christian university offering undergraduate programs grounded in the liberal arts with an array of nationally recognized graduate and professional schools. Founded in 1841, Samford is the 87th-oldest institution of higher learning in the United States. The Wall Street Journal ranks Samford 1st nationally for student engagement and U.S. News & World Report ranks Samford 37th in the nation for best undergraduate teaching and 97th nationally for best value. Samford enrolls 5,758 students from 48 states and 22 countries in its 10 academic schools: arts, arts and sciences, business, divinity, education, health professions, law, nursing, pharmacy and public health. Samford fields 17 athletic teams that compete in the tradition-rich Southern Conference, and ranks 3rd nationally for its Graduation Success Rate among all NCAA Division I schools.
Director of Communication
Holly Gainer
Hgainer1@samford.edu
912-344-8443