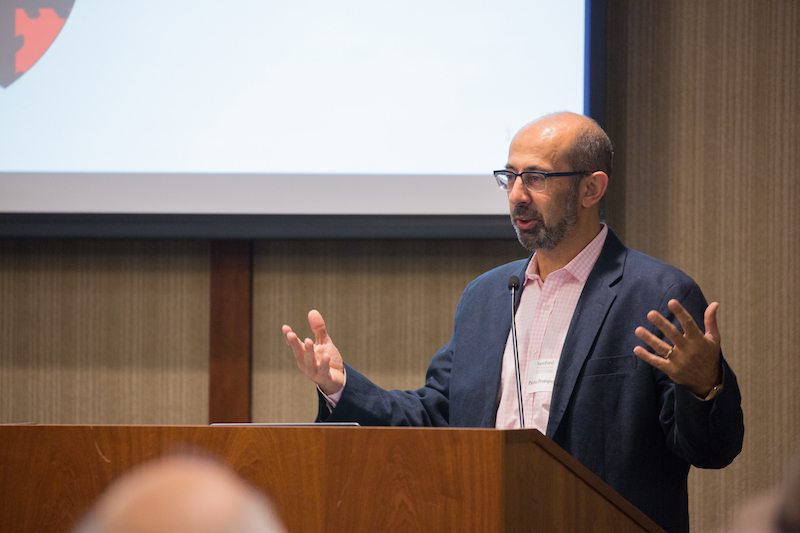 A native of Cyprus, Pavlos Protopapas, wasn’t sure where his life would take him after high school. A group of professionals and students gathered for the Samford Professional Network on Thursday, Oct. 25, to learn about his journey to become one of the world’s most well-known data scientists and what he predicts about the future of data for business.

After high school, Protopapas joined the military, but quickly realized that wasn’t for him.

“If you fail at something, you have to pick yourself back up and figure out what to do next,” Protopapas said. He enrolled at Imperial College in London where he studied physics. He continued to study at the University of Pennsylvania where he ultimately received a Ph.D. in theoretical physics.

“I am always learning as I go,” he said. “When I started collecting astronomy data, it was dirty, so I learned data cleaning, and on and on.”

While at the University of Pennsylvania he served as the associate director of the National Scalable Cluster Project (NSCP), one of the initial attempts at large-scale distributed computing on a grid-like model.

Now, Protopapas serves as the scientific program director and a lecturer for Harvard University’s Institute for Applied Computational Science (IACS) and is the co-creator of Applied Math 207, an IACS core course in stochastic optimization methods popular with students across the social science, science and engineering disciplines.

“It was fun for me and for my DATA401 students to see the principles we learn in action. We talk about how you build predictive models using a set of data where the outcome of interest is already labeled. In his case, he was building a model that would automatically label stars, and he had to start labeling a few points of light by hand. He even told a funny story about how his mom helped label the first set of stars,” shared Joy Buchanan, assistant professor of quantitative analysis and economics.

In addition to the Master of Data Science program already offered at Harvard, Protopapas has been part of a team that has helped launch the new Master of Business Administration / Data Science joint degree which started this year.

“Glassdoor ranked data scientist as the number one job category in 2017. Data and the way businesses use data is not going away,” Protopapas said. “Data drives the decisions we make and how we proceed in business. Business students need to learn these things, otherwise they’ll be behind. Unless you understand the underlying data and innovation behind your business, you won’t be able to propose business plans in the new world of data.”

In 2018, Samford University’s Brock School of Business launched a data analytics concentration for business majors and a minor for nonbusiness majors. The program will help students gain a competitive advantage for business careers in the age of data.

“The use of information as a strategic tool for business has exploded recently. It is incumbent on us to teach the latest developments and industry practices in data analytics,” said Dean Howard Finch. “Professor Protopapas brought cutting edge information on how the field of computational science is developing, and our students and faculty members benefited greatly from his expertise.”

To learn more about the Brock School of Business data analytics concentration for business majors see here and the minor for nonbusiness majors click here.