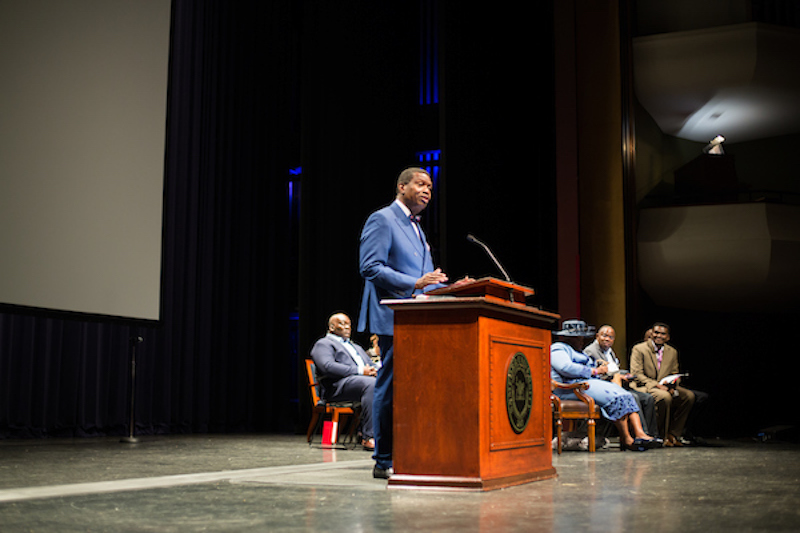 Enoch A. Adeboye, a Nigerian pastor and the general overseer of the worldwide Redeemed Christian Church of God (RCCG), spoke to Samford students about the power of perseverance during campus worship Oct. 24 in the Wright Center.

The renowned pastor originally trained for a career in university administration after earning advanced degrees in hydrodynamics and mathematics from the University of Lagos, Nigeria. It was this combination of intellectual intelligence and spiritual tenacity that Christson Adedoyin, an associate professor of social work who helped arrange Adeboye’s visit, hoped would inspire students.

In his address, Adeboye shared four pillars of success ­— vision, diligence, perseverance and prayer. He attributes these values to helping achieve his goals with God’s grace.

“First you must have vision,” he said. “You must have a goal that is far bigger than yourself. Second, you must have diligence because the moment you begin to move toward your vision, obstacles will try to slow you down.”

He shared his own journey of being born into an impoverished remote village in southwestern Nigeria with dreams to grow beyond the limits of his home. Adeboye’s determination and commitment in Christ eventually brought him to host millions in worship at the RCCG. By 1998, he was hosting crowds of worshipers in the millions and Adeboye’s name was becoming known worldwide. He has authored 31 books on ministry, faith-based issues and daily devotionals. In 2009 he was named one of the World’s Fifty Most Powerful People by Newsweek magazine.

Adeboye cited James 1:5-7. “If you are to receive anything from God, you must not waiver. Your determination must be very strong… The world is full of examples of people who have achieved great things. Those who kept on failing, but kept on going… I have good news for you, no matter how big your dream, God can bring it to pass,” he said.

Adeboye’s visit to Samford continues the university’s tradition of hosting a wide array of religious leaders on campus.