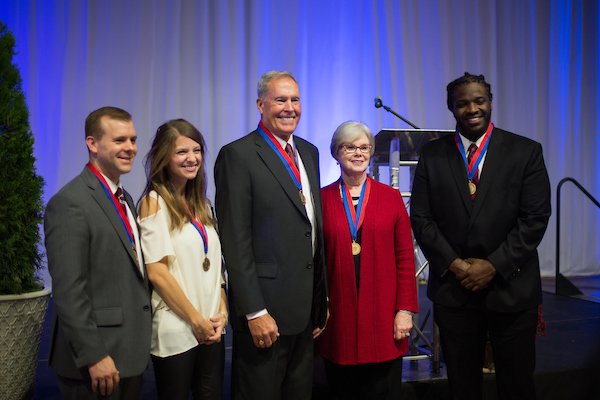 Five Samford University alumni were honored at the annual Alumni Candlelight Dinner and Awards Program, The Beesons, during 2018 Homecoming weekend.

The honorees represent a number of industries including health care, athletics, education and ministry. The Beesons are presented as three categories: Alumni of the Year, Outstanding Young Alumnus and Humanitarians of the Year.

Alumni of the Year honorees were nominated by members of the Samford community, and selected by a committee of Samford Alumni Association representatives and university administrators. They are distinguished in their professional careers, community and church involvement, and in their ongoing service to Samford.

The award to an outstanding young alumnus honors a graduate from the past 10 years and was established in 2009 to recognize recent graduates for professional achievement and involvement with Samford.

The Humanitarian of the Year award was established in 2016 to recognize Samford graduates of distinction, wide respect and acknowledged leadership who have made outstanding contributions to better the lives of those around them by staying true to the Samford mission.

Bradley Dennis ’73 and Kimeran Stevens ’70 have been named Alumni of the Year, the highest honor the university bestows on graduates.

Dennis, who previously served as the chief medical officer at Brookwood Medical Center for 20 years, now serves on the advisory board for the Howard College of Arts and Sciences. In this role he helped create the board’s scholarship.

Stevens serves as a co-chair of the Forever Samford campaign, seeking to raise $300 million over a seven-year period. She teaches children’s and adult Sunday School and women’s Bible studies as an active member of Dawson Memorial Baptist Church.

Jeremy Towns ’13, has demonstrated commitment to ongoing leadership in ministry that impacts the lives of not only Samford students, but those across other schools as well. In addition to helping establish a student ministry at Samford called Radical Athlete and Student Oasis Ministry (RANSOM), he also established Next Level Sports Camps, which uses sports to attract children and youth to Jesus.

Both 2006 Samford graduates, Allison and Tyler Fuqua founded Not Forgotten, an organization offering care to Peruvian children in need. Their goal is to provide holistic care, in which educational, psychological and spiritual needs are met in addition to physical needs. Today, Not Forgotten provides ongoing care for 24 children in three bungalows.

Read more about the awards and previous recipients here.