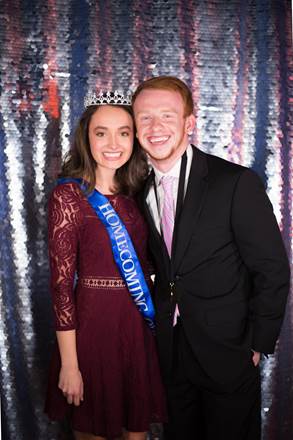 Samford University seniors Anne-Chason Wachter and Trent Taylor were honored as the 2018 Homecoming queen and king during the Homecoming Ball Nov. 1 at Seibert Gymnasium. The two were chosen in a university-wide vote.

Wachter and Taylor both serve as student ambassadors, helping to represent the school, faculty, staff and alumni. Wachter is the daughter of Chason and Rachel Wachter. She is an elementary education major from Spanish Fort, Alabama. Taylor is the son of Mark and Francie Taylor. He is a political science major from Carrollton, Georgia.

Other homecoming court representatives were:

Carson Leigh Guess, daughter of Doug and Laurie Guess. She is an accounting major from Clarkston, Georgia.

Lizzie Johnson, daughter of Rob and Angie Johnson. She is a nursing major from Knoxville, Tennessee.

Cameron James Dobbins, son of Jim and Laura Dobbins. He is a marketing and Spanish major from Cordova, Tennessee.

James Hornsby, son of Tenna and Howard Hornsby. He is an elementary education major from Decatur, Tennessee.

Jud Tarence, daughter of Zane and Jamie Tarence. She is a nursing major from Birmingham, Alabama.

Mike Williams, son of Greg and Michelle Williams. He is an economics major from McCalla, Alabama.

Chris Harmon, son of Chris and Melanie Harmon. He is an elementary education major from Savannah, Georgia.

Morgan Champion, daughter of Anna Marie and Wesley Champion. She is a journalism and mass communication and Spanish major from Charleston, South Carolina.